Cocker Spaniels were originally bred as hunting dogs in the United Kingdom, with the term cocker deriving from their use to hunt the Eurasian woodcock. When the breed was brought to the United States, it was bred to a different standard, which enabled it to specialize in hunting the American woodcock. Further physical changes were bred into the cocker in the United States during the early part of the 20th century.

Cocker spaniels are popular family pets. The English version is usually brown and ginger in color. Their fur is very soft and their noses are big. They have very big floppy ears. There are two version of cocker spaniels, show dogs and hunters. They are the smallest of the sporting dogs.

They are bred from an earlier 19th century dog called field spaniels. The smallest dogs in litters were called "cockers". This was because They were small enough to go under hedgerows where larger dogs could not go. They could also move through brambles and bushes to flush woodcocks into the open. 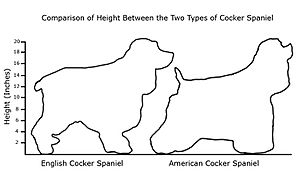 A graph showing the height and shape difference between the American and English Cocker.

There are two modern breeds of cocker spaniel, the English Cocker Spaniel and the American Cocker Spaniel. They were bred as gun dogs; to use their sense of smell to cover low areas near the handler in order to flush birds into the air to be shot, and to use their eyes and nose to locate the bird once downed, and then to retrieve the bird with a soft mouth.

All content from Kiddle encyclopedia articles (including the article images and facts) can be freely used under Attribution-ShareAlike license, unless stated otherwise. Cite this article:
Cocker Spaniel Facts for Kids. Kiddle Encyclopedia.