The American Cocker Spaniel is a breed of sporting dog. It is a spaniel type dog that is closely related to the English Cocker Spaniel; the two breeds separared during the 20th century due to differing breed standards in the US and the UK.

In the United States, the breed is usually called the Cocker Spaniel, while elsewhere in the world, it is called the American Cocker Spaniel in order to differentiate it from its older English cousin.

The word cocker is commonly thought to come from their use to hunt woodcock in England, while spaniel is thought to be from the animals origins in Spain.

The breed is the smallest of the sporting dogs recognized by the AKC, and its distinctly shaped head makes it immediately recognizable. In addition, there are some marked differences between it and its English relative. It is a happy breed with average working intelligence, although by being bred to a show standard it is no longer an ideal working dog.

Members of the breed suffer from a wide variety of health ailments including problems with their hearts, eyes and ears. 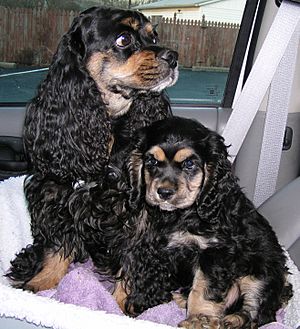 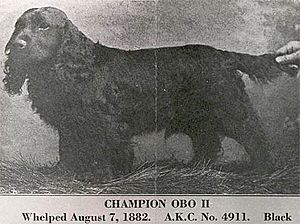 Ch. Obo II, considered to be the foundation sire of the American Cocker Spaniel

According to historical records, the first spaniel was brought to North America aboard the Mayflower which sailed from Plymouth, England and landed in New England in 1620. The first Cocker Spaniel recorded in America was a liver and white dog named Captain, who was registered with the American Kennel Club in 1878.

In 1881, the American Cocker Spaniel Club was formed; it would later become the American Spaniel Club (ASC) and is now known as the oldest breed club for dogs in the United States. The task of the club was initially to create a standard to separate the Cocker Spaniel in America from other types of land spaniels, a task which would take over 20 years, only being completed in 1905. 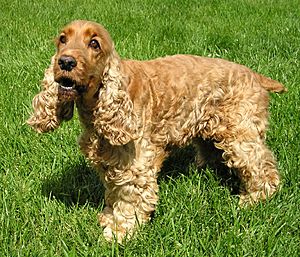 Towards the end of the 19th century, the breed had become popular in America and Canada due to their dual use as a family pet and a working dog. In the early 20th century the breeders on either side of the Atlantic had created different breed standards for the Cocker Spaniel and the breed gradually diverged from one another, with the two becoming noticeably different by the 1920s. The American Cockers by now had a smaller muzzle, their coats were softer and the dogs overall were lighter and smaller.

The differences were so apparent that in 1935, breeders founded the English Cocker Spaniel Club and restricted breeding between the two types of spaniel. 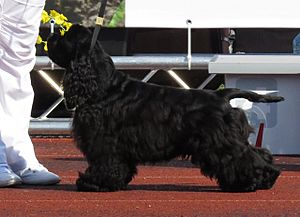 A black American Cocker Spaniel in a show cut

American Cocker Spaniels have won best in show at the Westminster Dog Show on four occasions, with the first win in 1921. My Own Brucie won the title twice in 1940 and 1941, and became known as the most photographed dog in the world. Brucie's win in 1940 coincided with the American Cocker Spaniel becoming the most popular breed of dog in the United States, and they would remain the most popular until 1952. 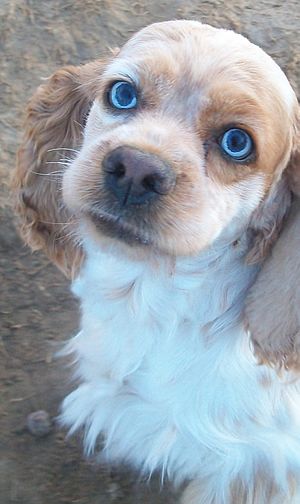 American Cocker Spaniels have had several links to the United States Presidency. In 1952, an American Cocker Spaniel became a household name when United States Senator Richard Nixon made his Checkers speech on 23 September, and have also been linked on several occasions with Rutherford B. Hayes and Harry S. Truman. More recently, a Cocker named Zeke lived with Bill Clinton while he was Arkansas Governor.

The American Cocker Spaniel is the smallest dog recognized by the American Kennel Club as a sporting dog, being on average between 13.5 to 15.5 inches (34 to 39 cm) high at the withers. It is a dog of normal proportions, with medium long silky fur on the body and ears, hanging down on the legs and belly (known as feathering). 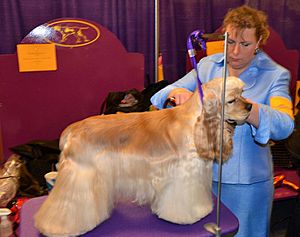 Nicely combed American Cocker Spaniel at an exhibition for dogs

The head has a upturned nose and the ears hang down. American Cocker Spaniels weigh around 24 to 30 pounds (11 to 14 kg) on average, with females of the breed usually weighing slightly less than the males.

The head of an American Cocker Spaniel makes the breed immediately recognizable, with the rounded dome of the skull, well-pronounced stop, and a square shaped lip. The drop ears are long, low set, with long silky fur, and the eyes are dark, large, and rounded. The nose can be black or brown depending on the color of the breed. 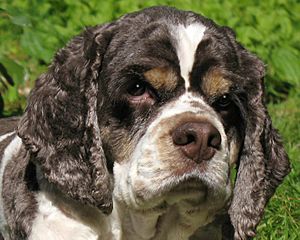 The coat of the breed come in a variety of shades with the colors being separated into three main groups: black/black and tan and parti-color.

American Cockers have rounder eyes, a domed skull, shorter muzzle and more clearly pronounced eyebrows than the English Cockers, whose head is more red setter-like. The English breed is also slightly larger, being between 14.5–15.5 inches (37–39 cm) in height.

Known as the "Merry Cocker", the American Cocker Spaniel breed standard defines the ideal dog of the breed as being with good temperament. The breed ranks 20th in Stanley Coren's The Intelligence of Dogs, a rating that indicates good "Working or Obedience Intelligence", or train-ability. 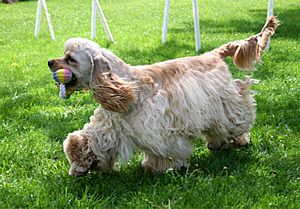 IQ tests run on a variety of breeds in the 1950s and 1960s showed that the American Cocker performed the best when tested on its ability to show restraint and delayed response to a trigger, a trait which was put down to the breed's bred-in ability when hunting to freeze upon finding a bird before flushing it out on command. However, they proved to be the worst breed tested when it came to manipulating objects with their paws, for instance uncovering a dish of food or pulling on a string.

With a good level of socialization at an early age, an American Cocker can get along with people, children, other dogs and other pets. This breed seems to always have a wagging tail and prefers to be around people; it is not best suited to the backyard alone. Cockers can be easily stressed by loud noises and by rough treatment or handling.

Members of the breed were originally used as hunting dogs, but increased in popularity as a show dog. It was bred more and more in conformation with the breed standard, resulting in certain attributes, such as a long coat, which no longer make it an ideal working dog. 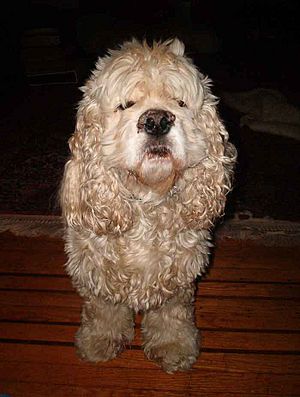 All content from Kiddle encyclopedia articles (including the article images and facts) can be freely used under Attribution-ShareAlike license, unless stated otherwise. Cite this article:
American Cocker Spaniel Facts for Kids. Kiddle Encyclopedia.