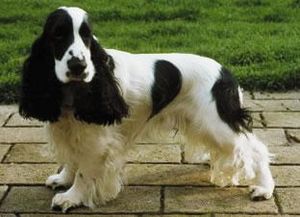 The English Cocker Spaniel is a breed of dog. It is one of many Spaniel breeds. Spaniels were bred to hunt. They were used as hunting dogs to retrieve shot animals. Now they are family pets, but are still very active. Cockers have a will of their own. Most English Cocker Spaniels are loving, happy, friendly and intelligent animals.

English Cocker Spaniels make good family pets. They do not like being alone. They will make noise and chew things if alone for too long. These dogs are faithful, social and affectionate. They like to sit close to their owners and sleep in the same room. They want to be together as often as possible. English Cocker Spaniels rank 18th in Stanley Coren's The Intelligence of Dogs. This means that they are very intelligent. 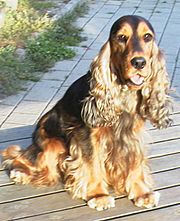 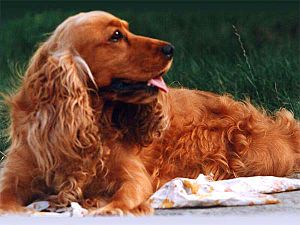 Spaniel type dogs have been found in art and literature for almost 500 years. Initially, spaniels in England were divided among land spaniels and water spaniels. The differentiation among the spaniels that led to the breeds that we see today did not begin until the mid-19th century. During this time, the land spaniels became a bit more specialised and divisions among the types were made based upon weight. According to the 1840 Encyclopedia of Rural Sports, Cockers were 12–20 lb (5.5–9 kg). At this time it was not uncommon for Cockers and Springers to come from the same litter. Even a puppy from a “Toy” sized lineage could grow to be a springer.

There is no indication from these early sources that spaniels were used to retrieve game. Rather they were used to drive the game toward the guns.

During the 1850s and 1860s, other types of Cockers were recorded. There were Welsh Springer Spaniels and Devonshire Cockers. Additionally, small dogs from Sussex Spaniel litters were called Cockers. In 1874 the first stud books were published by the newly formed kennel club. Any spaniel under 25 lb (11 kg) was placed in the Cocker breeding pool, however the Welsh Cocker was reclassified as a Springer in 1903 due to its larger size and shorter ear. "...in those days only those dogs up to a hard day’s work and sensible specimens were allowed to live, as absolute sporting purposes were about their only enjoyment and dog shows were hardly heard of...".

The sport of conformation showing began in earnest among spaniels after the Spaniel Club was formed in 1885. When showing, the new Springer and Cocker, both were in the same class until The Spaniel Club created breed standards for each of the types. The Kennel Club separated the two types eight years later. Since then, the Springer and Cocker enthusiasts have bred in the separate traits that they desired. Today, the breed differ in more ways than weight alone.

At Crufts, the English Cocker Spaniel has been the most successful breed in winning Best in Show, winning on a total of seven occasions between 1928 and 2009, with wins in 1930, 1931, 1938, 1939, 1948, 1950 and 1996. In addition, the breed make up three of the four winners who have won the title on more than one occasion with all three coming from H.S. Lloyd's Ware kennel. Due to World War II, the English Cocker Spaniel managed to be the only breed to have won the title between 1938 and 1950, although the competition was only held on four occasions during that period. The most recent best in show was Sh. Ch. Canigou Cambrai in 1996.

In the late 19th century with the increase in popularity of dog shows and the creation of standards for various breeds, the Spaniel family began to split into various different breeds. A group of enthusiasts decided to create a large black spaniel breed. Four dogs would act as progenitors for this new breed, of which two were Cocker Spaniels, one was a Cocker Spaniel/English Water Spaniel cross and one was a Norfolk Spaniel. This new breed was named the Field Spaniel, and was recognised by the Kennel Club in 1892. 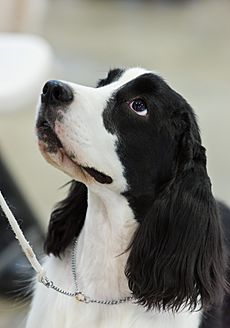 The English Cocker Spaniel is a sturdy, compact, well-balanced dog. It has a characteristic expression showing intelligence and alertness. Its eyes should be dark and its lobular ears should reach "a bit past" the tip of the nose when pulled forward. Today, a significant difference in appearance exists between field-bred and conformation show-bred dogs. The Cocker's tail is customarily docked in North America. In countries where docking is legal, the tail is generally docked at about 4–5 inches (10–13 cm) in field-bred dogs while show dogs are generally docked closer to the body. Docking is now illegal in Australia, South Africa and Scotland. In England and Wales, docking can only be carried out on dogs where the owners have proved that the dogs will be used as working or shooting dogs.

The English Cocker Spaniel is similar to the English Springer Spaniel and at first glance the only major difference is the larger size of the Springer. However English Cockers also tend to have longer, and lower-set ears than English Springers. In addition Springers also tend to have a longer muzzle, their eyes are not as prominent and the coat is less abundant. 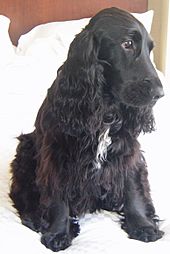 Breed standards restrict dogs to certain colors for the purposes of conformation showing (dependent on country), whereas working Cockers can be any of a wide variety of colors. For instance, the breed standard of the United Kingdom's Kennel Club states that in solid colours, no white is allowed except for on the chest.

They come in solid (or "self"), particoloured, and roan types of markings. Roan is similar to merle, but consists of solid patches and white patches speckled or "ticked" with the same color as the solid patches.

Of the solid colours, sable is considered rare, and is classified by some countries as being a type of particolour on account of its mixed hair shafts. White is black/brown pigmentation is also considered rare, and is also usually classified as a particolour too. In addition a silver/ash colour, usually associated with the Weimaraner breed of dog, is considered genetically possible but is yet to be recorded by the United Kingdom's Kennel Club. Of the roan varieties, lemon roan with a light brown pigmentation is the most recessive of all the roans. Plain white Cockers are rarely born, and are thought to be more prone to deafness than those with more pigmentation. As such they are generally not encouraged in the breed. 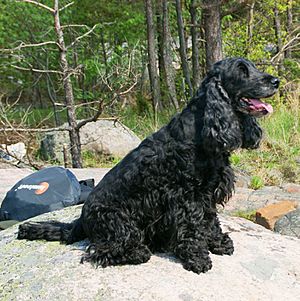 Cockers are compassionate, determined, kind, intelligent, athletic, alert and resilient and make great family pets. The breed does not like being alone, and will bond strongly to an individual person in a family, usually the one who feeds it. Known for optimism, intelligence and adaptability, the breed is extremely loyal and affectionate. The English Cocker Spaniel has a cheerful nature. They rank 18th in Stanley Coren's The Intelligence of Dogs, being of excellent working/obedience intelligence. Due to the breed's happy disposition and continuously wagging tail, it has been given the nickname "merry cocker". They can also be dominant but loyal to their companion.

With a good level of socialisation at an early age, Cocker Spaniels can get along well with people, children, other dogs and other pets. This breed seems to have a perpetually wagging tail and prefers to be around people; it is not best suited to the backyard alone. Cockers can be easily stressed by loud noises and by rough treatment or handling. When trained with a soft hand and with lots of rewards, the Cocker Spaniel will be an obedient and loving companion with a happy, cheerful nature. 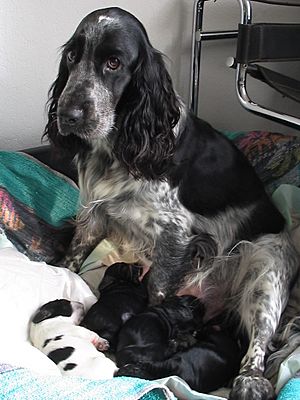 Common health issues with English Cockers are bite problems, skin allergies, shyness, cataracts, deafness (affecting 6.3% of the dogs of this breed), aggression towards other dogs, and benign tumours. 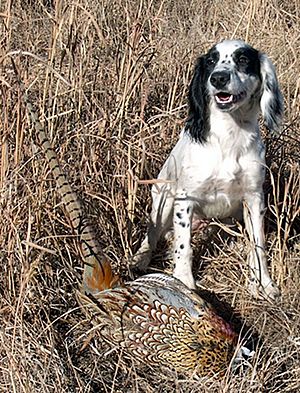 A field-bred English Cocker Spaniel with its quarry, a Common pheasant 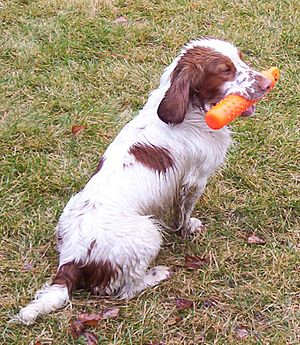 This breed, like many others with origins as working dogs, has some genetic lines that focus on working-dog skills and other lines that focus on ensuring that the dog's appearance conforms to a breed standard; these are referred to as the "working" (or "field-bred") and "conformation" strains, respectively. After World War II, Cocker Spaniels bred for pets and for the sport of conformation showing increased enormously in popular appeal, and, for a while, was the most numerous Kennel Club registered breed. This popularity increased the view that all Cockers were useless as working dogs. However, for most dogs this is untrue, as even some show-bred Cockers have retained their working instinct.

Today, this breed is experiencing a resurgence in usage as a working and hunting dog. Dogs from working lines are noticeably distinct in appearance. As is the case with the English Springer Spaniel, the working type has been bred exclusively to perform in the field as a hunting companion. Their coat is shorter and ears less pendulous than the show-bred type. Although registered as the same breed, the two strains have diverged significantly enough that they are rarely crossed. The dogs that have dominated the hunt test, field trial and hunting scene in the United States are field-bred dogs from recently imported English lines. Working-dog lines often have physical characteristics that would prevent them from winning in the show ring. This is a result of selecting for different traits than those selected by show breeders. The longer coat and ears, selected for the show ring, are an impediment in the field. Cuban authorities train and use English Cocker Spaniels as sniffer dogs to check for drugs or food products in passengers' baggage at Cuban airports.

A field-bred cocker spaniel is first and foremost an upland flushing dog. In performing this task there are some skills the dog must be trained to perform.

Following the birth of Prince George of Cambridge, Lupo was featured in one of the first official photographs. He was subsequently featured in a family portrait with the Duke and Duchess and Prince George in March 2014. He has travelled with his owners to their holiday residence in Norfolk, but did not travel with them on their tour of Australia and New Zealand in 2014.

All content from Kiddle encyclopedia articles (including the article images and facts) can be freely used under Attribution-ShareAlike license, unless stated otherwise. Cite this article:
English Cocker Spaniel Facts for Kids. Kiddle Encyclopedia.