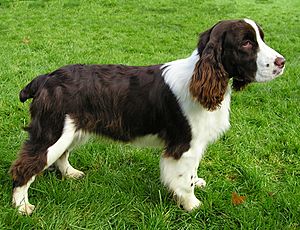 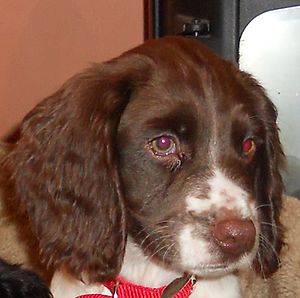 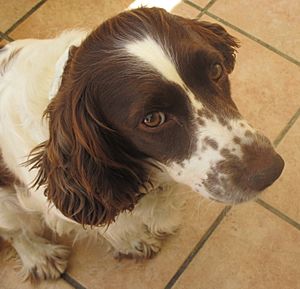 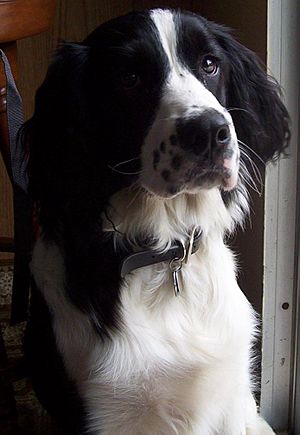 The English Springer Spaniel is a medium-sized compact dog. Its coat is moderately long with feathering on the legs and tail. It is a well proportioned, balanced dog with a gentle expression and a friendly wagging tail.

Show dogs have longer fur. The tail is docked to a short stub in those countries that permit docking. They are generally more thickly boned and heavier than field-bred springers.

Field-bred dogs tend to have shorter, coarser coats than the longer furred show-bred dogs. They normally only shed in summer and spring months but shed occasionally in the autumn. The coat comes in black or liver (dark brown) with white markings or predominantly white with black or liver markings; Tricolour: black and white or liver and white with tan markings, usually found on eyebrows, cheeks, inside of ears and under the tail. Any white portion of the coat may be flecked with ticking.

The typical Spaniel is friendly, eager to please, quick to learn and willing to obey. In the right circumstances they can be an affectionate and easy-going family dog. Its alertness and attentiveness make it a good hunting companion. A typical Springer Spaniel will often choose one person in the family to be most loyal to and stick with that person as much as possible.

The English Springer Spaniel ranks 13th in Stanley Coren's The Intelligence of Dogs and is considered an excellent working dog. It has exceptional stamina and needs moderate amounts of activity, to focus its mind and to provide exercise, although this is different for each dog. Its long-legged build makes it among the fastest of the spaniels.

It is a sociable breed that enjoys the company of children and handles the company of other pets well. The hunting breed may not get along well with cats, however. If left alone for too long, they can become destructive and mischievous through boredom. They love the water, and tend to get wet whenever they have the chance.

The English Springer Spaniel has a typical lifespan of 10.5 to 15 years.

English Springer Spaniels tend to gain weight easily, and owners need to be careful about their food consumption. 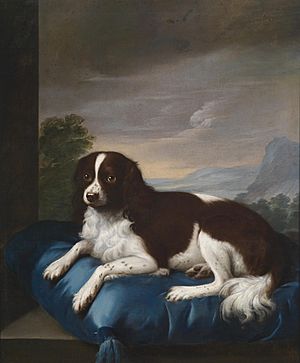 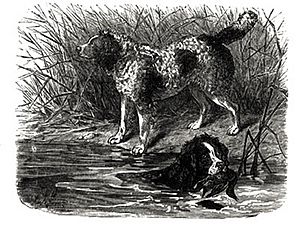 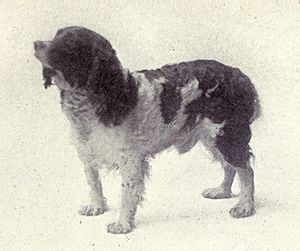 English physician Dr. John Caius described the spaniel in his book the Treatise of Englishe Dogs published in 1576. His book was the first work to describe the various British breeds by function. By 1801, Sydenham Edwards explained in the Cynographia Britannica that the land spaniel should be split into two kinds, the Springing, Hawking Spaniel, or Starter; and the Cocking or Cocker Spaniel.

At this point in time, both cocker spaniels and springer spaniels were born in the same litters. The purpose of the breed was to serve as a hunting dog. The smaller cockers were used to hunt woodcock, while their larger littermates, the springer spaniels, would "spring"—or flush—the gamebird into the air where a trained falcon or hawk would bring it to the handler.

Many spaniel breeds were developed during the 19th century, and often named after the counties in which they were developed, or after their owners, who were usually nobility. Two strains of larger land spaniel were predominant and were said to have been of "true springer type." These were the Norfolk and the Shropshire spaniels, and by the 1850s, these were shown under the breed name of Norfolk spaniel.

An English Springer Spaniel is foremost an upland flushing dog. There are a number of skills that breeders train the dog to perform for their occupation. 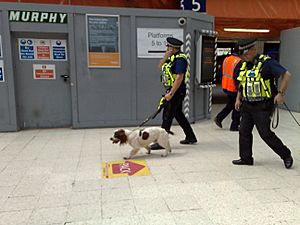 The Springer is not limited to detecting explosives. Murphy, a male Springer has been trained by HM Prison Service in HMP Norwich to search for mobile phones. He can tell the difference between the guards' phones and illegal phones held by inmates. Other varied uses for the Springer can include sniffing out bumblebee nests, illegal immigrants, and blood. Springers are used for drug detection in the United Kingdom, Sweden, Finland, Isle of Man, Ireland, Canada CBSA and Qatar.

All content from Kiddle encyclopedia articles (including the article images and facts) can be freely used under Attribution-ShareAlike license, unless stated otherwise. Cite this article:
English Springer Spaniel Facts for Kids. Kiddle Encyclopedia.