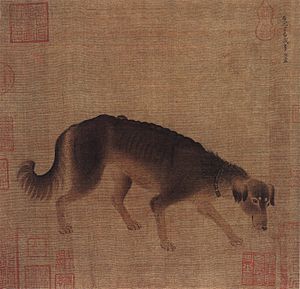 There are two types of hounds, sight hounds and scent hounds. The difference between them is if they use sight or smell to find what they are hunting for. They are often used to hunt animals with fur. In America, raccoon, coyote, and large predators are hunted with hounds, and traditionally in Britain hounds were used to hunt the fox.

These dogs are also called bird dogs. They are used by hunters who carry shotguns to hunt small animals. Gun dogs come in three main classes. The classes are retrievers, flushing spaniels, and pointing breeds.

The main job of a retriever is to get the animal after the hunter shoots it. Retrievers are very good in the water and often used by hunters shooting ducks.

Flushing spaniels are used when birds being hunted are found in areas where they can hide, for example high grass. The spaniel will run through the grass. This makes the birds fly into the air so the hunter can shoot them. Spaniels stay close to the hunter so when the birds start to fly, the hunter is close enough to shoot them.

Pointers find birds then stand still and point at where the bird is. They often are farther away from the hunter than a spaniel would be. By pointing instead of flushing the bird out, they give the hunter time to get close enough to shoot the bird.

These dogs are almost always used to hunt mammals. Terriers are used to find the den or living space of the animal. They will go into where the animal lives and either force it to run out or they will kill it. Many of the animals hunted with terriers are animals that cause damage, for example, ground hogs, fox and badger.

Curs are used in the same way as terriers but on larger animals. Curs are used to hunt boars, raccoon, cougars, and other large mammals

Breeds and capabilities used in hunting

For a list of breeds of each type, see the detailed articles for each category:

All content from Kiddle encyclopedia articles (including the article images and facts) can be freely used under Attribution-ShareAlike license, unless stated otherwise. Cite this article:
Hunting dog Facts for Kids. Kiddle Encyclopedia.