The dachshund is a breed of dog. It is usually short (small in height), but long from front to back and with short legs. “Dachshund” is a German word that is used in English, and it means “badger dog.” (In German, dachshunds are called Dackel or Teckel.)

The breed was developed to use its sense of smell to find, chase, and hunt badgers and other animals that live in holes. A dachshund has a long, narrow body, so it is sometimes called a wiener dog, hot dog, or sausage dog. Some people believe that using those words does not show respect. 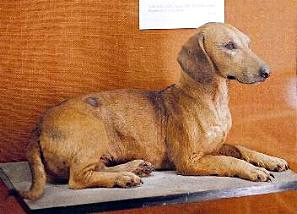 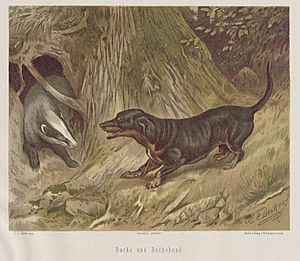 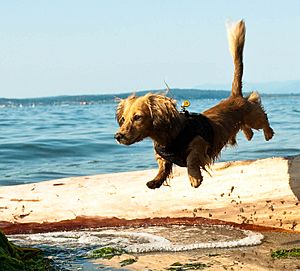 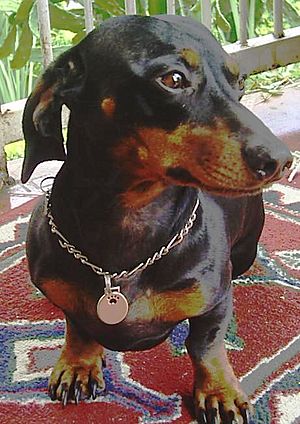 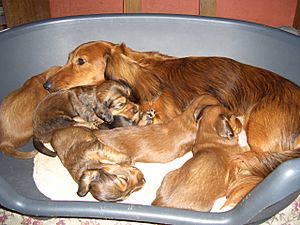 Some writers and dachshund experts have theorized that the early roots of the dachshund go back to ancient Egypt, where engravings were made featuring short-legged hunting dogs. Recent discoveries by the American University in Cairo of mummified dachshund-like dogs from ancient Egyptian burial urns may lend credibility to this theory. In its modern incarnation, the dachshund is a creation of German breeders and includes elements of German, French, and English hounds and terriers. Dachshunds have been kept by royal courts all over Europe, including that of Queen Victoria, who was particularly enamored of the breed.

The first verifiable references to the dachshund, originally named the "Dachs Kriecher" ("badger crawler") or "Dachs Krieger" ("badger warrior"), came from books written in the early 18th century. Prior to that, there exist references to "badger dogs" and "hole dogs", but these likely refer to purposes rather than to specific breeds. The original German dachshunds were larger than the modern full-size variety, weighing between 14 and 18 kg (31 and 40 lb), and originally came in straight-legged and crook-legged varieties (the modern dachshund is descended from the latter). Though the breed is famous for its use in exterminating badgers and badger-baiting, dachshunds were also commonly used for rabbit and fox hunting, for locating wounded deer, and in packs were known to hunt game as large as wild boar and as fierce as the wolverine.

There are huge differences of opinion as to when dachshunds were specifically bred for their purpose of badger hunting, as the American Kennel Club states the dachshund was bred in the 15th century, while the Dachshund Club of America states that foresters bred the dogs in the 18th or 19th century.

Double-dapple dachshunds, which are prone to eye disease, blindness, or hearing problems, are generally believed to have been introduced to the United States between 1879 and 1885.

The flap-down ears and famous curved tail of the dachshund have deliberately been bred into the dog. In the case of the ears, this is to keep grass seeds, dirt, and other matter from entering the ear canal. The curved tail is dual-purposed: to be seen more easily in long grass and, in the case of burrowing dachshunds, to help haul the dog out if it becomes stuck in a burrow. The smooth-haired dachshund, the oldest style, may be a cross between the German Shorthaired Pointer, a Pinscher, and a Bracke (a type of bloodhound), or to have been produced by crossing a short Bruno Jura Hound with a pinscher. Others believe it was a cross from a miniature French pointer and a pinscher; others claim that it was developed from the St. Hubert Hound, also a bloodhound, in the 18th century, and still others believe that they were descended from Basset Hounds, based upon their scent abilities and general appearance.

The exact origins of the dachshund are therefore unknown. According to William Loeffler, from The American Book of the Dog (1891), in the chapter on dachshunds: "The origin of the Dachshund is in doubt, our best authorities disagreeing as to the beginning of the breed." What can be agreed on, however, is that the short-haired dachshund gave rise to both the long-haired and the wire-haired varieties. 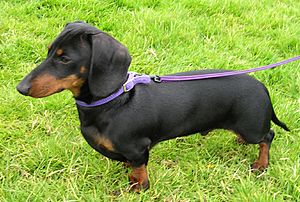 Today, dachshunds have crooked legs, loose skin, and a barrel-like chest. Over time, breeders selected dogs so that those features would appear in puppies. That way, dachshunds could do a better job of burrowing into tight spaces. Another feature is a long tail.

The coat or fur of a dachshund comes in three kinds – smooth or short-haired, long-haired, and wire-haired. The wire-haired dachshund usually is shorter front to back than the other two.

Dachshund fur comes in many colours. The colors that are most common are red (a brown color that looks a little reddish) and black-and-tan (black body with brown parts). There are solid black and solid chocolate-brown dachshunds. Many people think those dachshunds are handsome, but the colors are not standard or official – that is, you cannot enter those dogs in some dog shows. 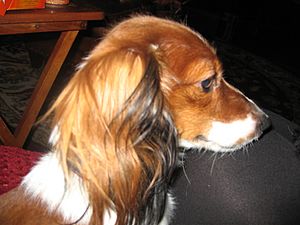 Light-colored dachshunds can sport amber, light brown, or green eyes; however, kennel club standards state that the darker the eye color, the better. They can also have eyes of two different colors; however, this is only found in dapple and double dapple dachshunds. Dachshunds can have a blue and a brown eye. Blue eyes, partially blue eyes, or a blue eye and a brown eye are called "wall" coloring, and are considered a non-desirable trait in kennel club standards. Dappled eyes are also possible.

Wall-eye is permissible according to DCA standards. Piebald-patterned dachshunds will never have blue in their eyes, unless the dapple pattern is present. 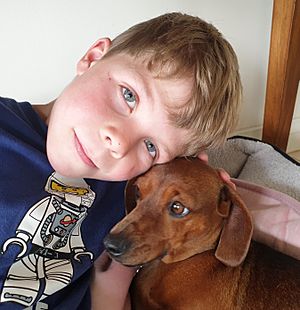 Little boy with his pet dachshund

Dachshunds are playful, fun dogs. People know that dachshunds like to chase small animals and birds, and when they chase those animals they do it ferociously (without fear and very intensely). Many dachshunds are strong-headed or stubborn, and that means they can be hard to train. However; if trained in proper way and at an early age, these dogs can be a good family dogs. These dogs should be trained for socialization and obedience. Dachshunds are often very loyal to their owners (devoted to their owners, or very interested in their owners). In fact, they can be much more loyal than other kinds of dogs. But wire-haired dachshunds often do not show that kind of loyalty to their owners.

Dachshunds are considered a small dog breed. Around 3/4 of a cup of food a day or 1/2 a cup twice a day is enough for an adult Dachshund.

They can quickly become obese if fed too much so make sure they aren't eating treats or table scraps and aren't "grazing" all day and have set meal times. 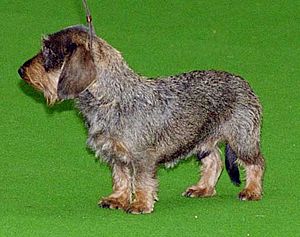 Dachshunds often have spinal problems, that is, their backbone can become injured. That is because of the dog’s very long spinal column and short rib cage. The problems are usually hereditary (genetic), that is, they are passed down from parent dogs to puppies.

A dachshund that is obese (fat) can have a higher risk of getting injured. That is because the extra weight puts more strain on the backbone (vertebrae). To prevent injury, dachshunds should not climb stairs or jump unless they really have to. It is also important to hold the dog the right way – by holding up the front and the rear parts of the body at all times.

All content from Kiddle encyclopedia articles (including the article images and facts) can be freely used under Attribution-ShareAlike license, unless stated otherwise. Cite this article:
Dachshund Facts for Kids. Kiddle Encyclopedia.