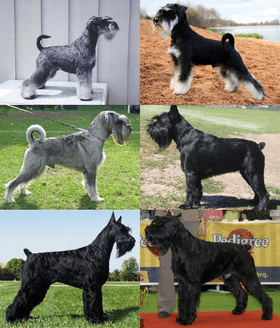 A schnauzer is a type of dog breed that originated in Germany in about the 14th century. The Standard Schnauzer is the oldest of the three three Schnauzer varieties: Miniature, Standard, and Giant. All three varieties have the distinctive whiskers, mustache and eyebrows.

The Standard Schnauzer is the prototype from which the other two were bred. From the middle ages on they guarded the livestock and family members. They are descended from European herding and guard dogs. As a distinctive breed, they appear in pictures of the 14th and 15th centuries. As far as can be determined they were bred from the Gray Wolf Spitz, the German poodle (pudel) and the Wirehaired Pinscher. About the middle of the 19th century German dog enthusiasts took an interest in the Schnauzer. Dog breeders experimented by crossing them with other breeds. First the Miniature Schnauzer was developed, then the Giant Schnauzer. 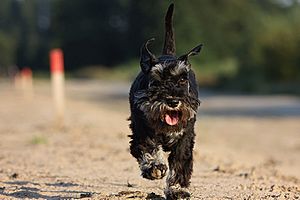 The breed is of above average intelligence and can be independent minded, so early training and diverse daily exercise are recommended. Based on Stanley Coren's book The Intelligence of Dogs (2006) ranking methodology, the Miniature ranked 12th, Standard 18th, and Giant 28th out of 140 breeds within 79 ranks on the ability to learn and obey new commands i.e. working and obedience intelligence. The first two were grouped among "excellent working dogs", while the Giant among "above-average working dogs". Additionally, experts ranked the Miniature as 5th among top 15 breeds at watchdog barking ability, the Giant as 6th among top 13 breeds at effective guard ability, while in adaptive intelligence all three breeds showed good problem-solving abilities. They are protective and energetic, and will alert members of the household to any potential danger, although its watchful nature can lead to persistent barking. To avoid annoying the neighbors, dog owners should make every effort to curb excessive barking through training.

Schnauzers have distinctive beards and long, feathery eyebrows. They are generally either a salt and pepper color, black, or white, but they can be brown also. Some owners shave their Schnauzers down the back while the hairs on their legs are kept long and curly, but this changes the coat color, so show Schnauzers especially will have their back coat "stripped" by hand, to encourage the salt and pepper pattern to emerge. It was traditional to have the tails docked and the ears cropped to give an alert appearance. It was common to crop the ears and dock the tails on working dogs. As these are ratters, these procedures don't give the rat anything to grab on to when being attacked and therefore cannot fight back. Cropping and docking are now illegal in the European Union, Australia, and New Zealand, and are becoming less common elsewhere. The Schnauzer's beard and leg hair should be brushed often to prevent mats from forming.

Schnauzers have a double coat. The top or guard coat is wiry, while the undercoat is soft. Stripping removes the undercoat and stimulates the hard top coat to come in fuller. The undercoat coat should be "stripped" (loose, dead hair is plucked) at least twice a year. A stripped Schnauzer will have a hard wiry coat as described in the breed standard. A shaved pet will lose the hard top coat and only exhibit the soft undercoat. Schnauzers are a type of dog that sheds less often than most dogs. 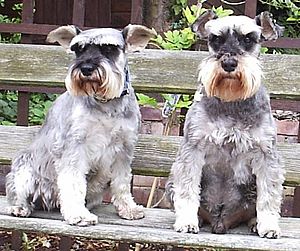 All content from Kiddle encyclopedia articles (including the article images and facts) can be freely used under Attribution-ShareAlike license, unless stated otherwise. Cite this article:
Schnauzer Facts for Kids. Kiddle Encyclopedia.