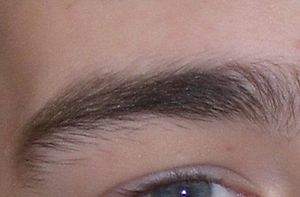 An eyebrow is the stripe of hair about 2 cm over the eye. Eyebrows protect the eyes, if water runs over the face or if there is too much sunlight. The eyebrow's ability to move is also important in facial expression.

It is believed by anthropologists that the main function of the eyebrow is to prevent moisture, mostly salty sweat and rain, from flowing into the eye. Greek physician Herophilos, in his treatise "Anatomy," was among the first to hypothesize such a theory, proposing that the eyebrows are "adorned with hair, so that if copious perspiration came [down], it would be contained by this 'check-point' of hair placed in its way until it is wiped off, so that it could not obstruct the eyes." The typical curved shape of the eyebrow (with a slant on the side) and the direction in which eyebrow hairs are pointed, make sure that moisture has a tendency to flow sideways around the eyes, along the side of the head and along the nose. The slightly protruding brow ridges of modern humans could also be used as a defense structure against the floods of moisture. Desmond Morris, discussing the possible function of the eyebrow in human evolution, criticized this suggestion as non-effective and suggested that the primary function of the eyebrows is to signal the changing moods of their owners. Together with the brow ridges, the eyebrows also shade the eyes from sunlight. Eyebrows also prevent debris such as dandruff and other small objects from falling into the eyes, as well as providing a more sensitive sense for detecting objects being near the eye, like small insects. 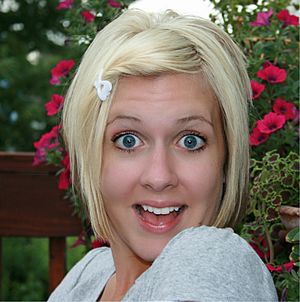 Eyebrows can be used to convey emotion, such as surprise.

Eyebrows have a facilitative function in communication, strengthening expressions, such as surprise or anger. The eyebrows can cause a "false facial expression", when a person's eyebrow shape appears to express an emotion that they are not experiencing.

Joseph Jordania suggested that the primary evolutionary function of clearly visible eyebrows was safety from predators during the vulnerable nighttime sleep, when early hominid groups started sleeping on the ground, away from the trees. Stealth predators (like big cats) as a rule stop hunting if they notice that prey animals are watching them. Cheap plastic masks, placed on the back of the head, saved many human lives in India and Bangladesh, where man-eating tigers claimed many victims in Sundarbans national park. Many predators (particularly big cats) are very sensitive to eyespots, and all the big cats have eyespots on the back of their own ears. According to Jordania, at night, when hominid eyes were closed, the eyebrows, arched upwards, and eyelashes, arched downwards, formed clearly definable oval eyespots on a ‘sleeping’ human face, creating an illusion that the eyes were still open and watching (and therefore could deter predators from attacking sleeping hominids). 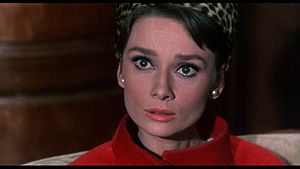 One of Audrey Hepburn's trademarks was her thick eyebrows.

All content from Kiddle encyclopedia articles (including the article images and facts) can be freely used under Attribution-ShareAlike license, unless stated otherwise. Cite this article:
Eyebrow Facts for Kids. Kiddle Encyclopedia.