The Scottish Terrier is one of the five breeds of terrier that originated in Scotland. It is also known as Aberdeen Terrier. The other four breeds of terrier from Scotland are Skye, Cairn, Dandie Dinmont, and West Highland White Terrier. Originally scottish terriers were used for hunting, but because of their small size, they are often kept as pets. 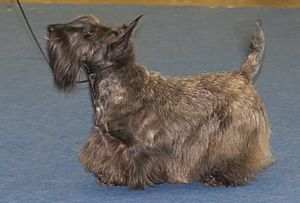 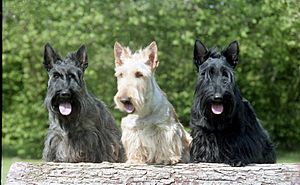 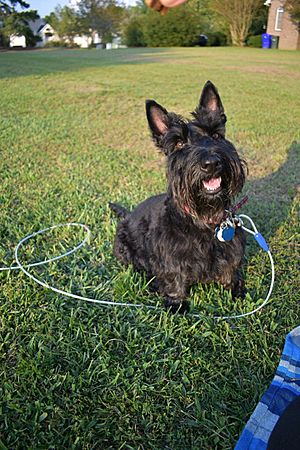 The Scottish Terrier is a small, compact, short-legged, sturdily-built terrier of good bone and substance. They have a hard, wiry, weather-resistant coat and a thick-set, cobby body which is hung between short, heavy legs. These characteristics, joined with his very special keen, piercing, "varminty" expression, and his erect ears and tail are salient features of the breed. The eyes should be small, bright and piercing, and almond-shaped not round. The color should be dark brown or nearly black, the darker the better. The ears should be small, prick, set well up on the skull and pointed, but never cut. They should be covered with short velvety hair.

The Scottish Terrier typically has a hard, wiry outer coat with a soft, dense undercoat. The coat should be trimmed and blended into the furnishings to give a distinct Scottish Terrier outline. The longer coat on the beard, legs and lower body may be slightly softer than the body coat but should not be or appear fluffy.

The coat colours range from dark gray to jet black and brindle, a mix of black and brown. Scotties with wheaten (straw to nearly white) coats sometimes occur, and are similar in appearance to the Soft-Coated Wheaten Terrier or West Highland White Terrier.

Scotties are territorial, alert, quick moving and feisty, perhaps even more so than other terrier breeds. The breed is known to be independent and self-assured, playful, intelligent, and has been nicknamed the 'Diehard' because of its rugged nature and endless determination. The "Diehard" nickname was originally given to it in the 19th century by George, the fourth Earl of Dumbarton. The Earl had a famous pack of Scottish Terriers, so brave that they were named “Diehards”. They were supposed to have inspired the name of his Regiment, The Royal Scots, "Dumbarton’s Diehards".

Scotties, while being described as very loving, have also been described as stubborn. They are sometimes described as an aloof breed, although it has been noted that they tend to be very loyal to their family and are known to attach themselves to one or two people.

It has been suggested that the Scottish Terrier can make a good watchdog due to its tendency to bark only when necessary and because it is typically reserved with strangers, although this is not always the case. They have been described as a fearless breed that may be aggressive around other dogs unless introduced at an early age. Scottish Terriers were originally bred to hunt and fight badgers. Therefore, the Scottie is prone to dig as well as chase small vermin, such as squirrels, rats, and mice. 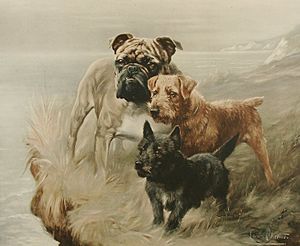 Come Over Here! (1915) by Lilian Cheviot, showing the approximate differences in sizes between the Scottish Terrier, the Welsh Terrier and the Bulldog.

The Scottie and the German Shepherd are the only breeds of dog that have lived in the White House more than three times. President Franklin D. Roosevelt was renowned for owning a Scottie named Fala, a gift from his distant cousin, Margaret Suckley. The President loved Fala so much that he rarely went anywhere without him. Roosevelt had several Scotties before Fala, including one named Duffy and another named Mr. Duffy. Eleanor Roosevelt had a Scottish Terrier named Meggie when the family entered the White House in 1933. More recently, President George W. Bush has owned two black Scottish Terriers, Barney and Miss Beazley. Barney starred in nine films produced by the White House. 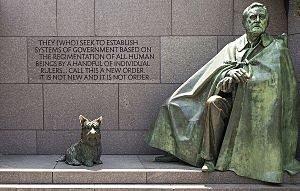 Fala at the Franklin Delano Roosevelt Memorial (bottom left), the only Presidential dog so honoured.

The Scottie is also renowned for being featured in the popular board game, Monopoly, as a player token. When the game was first created in the 1930s, Scotties were one of the most popular pets in the United States, and it is also one of the most popular Monopoly game tokens, according to Matt Collins, vice president of marketing for Hasbro. In Disney's 1955 film Lady and the Tramp, a Scottish terrier named Jock is the friend of Lady, the American Cocker Spaniel. A Scottish Terrier named Dulcinea is a scene-stealer in the 1998 Latin American novel Yo-Yo Boing! by Giannina Braschi. In P. G. Wodehouse’s Jeeves and Wooster novels, Bertie Wooster’s principal antagonist Aunt Agatha has an Aberdeen terrier called Mackintosh. Scottish Terriers are also prevalent in scenes of Coraline (film).

In May 2007, Carnegie Mellon University named the Scottish Terrier its official mascot. The Scottie had been a long-running unofficial mascot of the university, whose founder's Scottish heritage is also honored by the official athletic nickname of "Tartans". Agnes Scott College in Decatur, Georgia also uses the Scottie as their mascot. The dog's image is a symbol for the Radley brand of bags. The amateur athletics organisation Jogscotland has an anthropomorphic Scottish Terrier as its mascot.

All content from Kiddle encyclopedia articles (including the article images and facts) can be freely used under Attribution-ShareAlike license, unless stated otherwise. Cite this article:
Scottish Terrier Facts for Kids. Kiddle Encyclopedia.