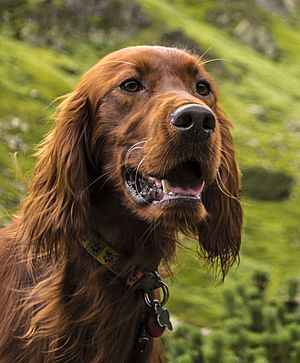 Irish Setters get along well with children, other dogs, and will enthusiastically greet visitors. Even though they do well with household pets, small animals may pose a problem for this breed, as they are a hunting breed. Some Irish Setters may have problems with cats in the house, and may be too rambunctious with small children. As the FCI, ANKC and UK Standards state, the breed should be "Demonstrably affectionate." As a result, Irish Setters make excellent companion animals and family pets.

Irish Setters are an active breed, and require long, daily walks and off-lead running in wide, open spaces. They are, however, a breed with a tendency to 'play deaf,' so careful training on mastering the recall should be undertaken before allowing them off-lead.

Irish Setters enjoy having a job to do. Lack of activity will lead to a bored, destructive, or even hyperactive dog. This is not a breed that can be left alone in the backyard for long periods of time, nor should they be. Irish Setters thrive on constant human companionship. Irish Setters respond swiftly to positive training and are highly intelligent.

Though they are usually alert to their surroundings, Irish Setters are not well-suited as guard dogs, as they are not a naturally assertive breed. 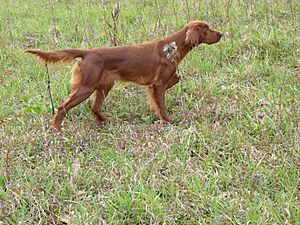 The Irish Setter was bred for hunting, specifically for setting or locating and pointing upland gamebirds. They are a tireless, wide-ranging hunter, and well-suited to fields and wet or dry moorland terrain. Using their excellent sense of smell to locate the mark (or bird), the Irish Setter will then hold a pointing position, indicating the direction in which the bird lies hidden.

The Irish Setter was brought to the United States in the early 19th century.

In 1874, the American Field put together the Field Dog Stud Book and registry of dogs in the United States was born. The FDSB is the oldest pure-bred registry in the United States. At that time, dogs could be registered even when bred from sires and dams of different breeds. At about this time, the Llewellin Setter was bred using blood lines from the Lavarack breeding of English Setter and, among other breeds, bloodlines from native Irish Setters. Around the same time, the red Irish Setter became a favourite in the dog show ring.

All content from Kiddle encyclopedia articles (including the article images and facts) can be freely used under Attribution-ShareAlike license, unless stated otherwise. Cite this article:
Irish Setter Facts for Kids. Kiddle Encyclopedia.