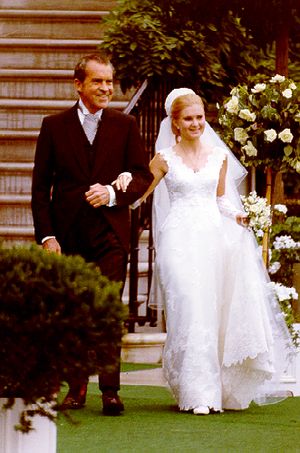 Tricia walking down the wedding aisle with her father, Richard Nixon

Patricia "Tricia" Nixon Cox was born on February 21, 1946 in Whittier, California. She is the daughter of former US president Richard Nixon and Pat Nixon. She is the older sister of Julie Nixon Eisenhower.

Unlike her sister, Tricia performed many ceremonial jobs, like going with her father to campaign stops and state visits. She married Edward F. Cox on June 12, 1971.

All content from Kiddle encyclopedia articles (including the article images and facts) can be freely used under Attribution-ShareAlike license, unless stated otherwise. Cite this article:
Tricia Nixon Cox Facts for Kids. Kiddle Encyclopedia.