Brookhaven is a borough in Delaware County, Pennsylvania, United States. The population was 8,006 at the 2010 census.

It is about 15 minutes away from South Philadelphia.

Brookhaven, Pennsylvania was originally part of a land grant given to William Penn in 1681 by King Charles II of England. The Proprietor negotiated with the Lenni-Lenape Indians, who were the original occupants of the land, the land was then divided into municipal districts. The area of Brookhaven was included in the Municipal District of Chester Township. 317 acres (1.3 km²) were surveyed to Thomas Coebourn who settled in 1682 along with Richard Few who was granted 227 acres (0.9 km²). Thomas Brassey was granted 385 acres (1.6 km²) in 1684. These original grants were parceled eventually into smaller pieces of land and sold to subsequent settlers, such as Trimble, Edwards, Lister and Shepherd, among others. Many of these original settlers have streets named after them in the borough. The elementary school is named Coebourn Elementary (on Coebourn Blvd) after Thomas Coebourn and there are streets named Trimble, Edwards, Lister and Shepherd.

For approximately two hundred and fifty years, the region was dependent upon a farming and dairy economy as well as two thriving mill businesses spanning both Chester Creek and Ridley Creek. Bisected by the 1687 Edgmont Great Road, Brookhaven developed into a town of small crossroads, at Sneath's Corners in the mid-19th century. The road from Hinkson's Corners (now Brookhaven Road), was established sometime before 1816 as a service road to the mills on Ridley and to Chester Creeks in 1847. These byways became major highways and at the crossroads of these two highways grew a cluster of services, professional offices and summer homes. In 1872, the name "Brookhaven" became most widely used after it was published in the letterhead of the Beatty Brothers General Store at Sneath's (later Beatty's) Corners.

The Brookhaven community attracted numerous doctors and lawyers, and at the start of the 20th century, was a popular locale for Sunday outings amongst residents of the river tier communities.

Brookhaven's mills were perhaps its most notable commercial activity. Thomas Coebourn established the second gristmill in the new Pennsylvania colony, successfully challenging William Penn's monopoly vested in the Caleb Pusey Mill (the Caleb Pusey house is still standing) downstream on Chester Creek. After a 1687 court battle went in Coebourne's favor and granted individuals the right to establish mills, the area's creeks powered a multitude of industries. The original Coebourne Log Mill was replaced in 1750 by a stone structure which was sold to Jonathan Dutton (Dutton Mill Road is a major road in the area) in 1792. A redrawing of Chester Township's borders in 1829 placed this site in present Middletown Township, with only the mill race and the owner's mansion in Brookhaven. The Johnson Ax Factory, the Lower Bank (Todmorden-Sackville) Hair Cloth Mills, Bickley's Gristmill and the Crozer Cloth Mill all utilized the notable drop for streams from the inland plateau to power their machinery. Both the 1826 and the post-flood 1844 mill surveys show large outputs for these factories.

In the latter part of the 19th century, several large stock farms were thriving; by the 1900s most of these were consolidated under the ownership of John P. Crozer (the namesake of Crozer-Chester Medical Center in Upland) who bred racehorses and prize bulls. After Crozer's death and World War II, these farms were sold off to developers.

In 1902, the New Chester Water Company built a filtration and storage facility which then serviced the entire city and Chester Township. This plant, on Harrison's Hill, opposite K-Mart, (K-Mart is now closed) is still in active use. The Delaware Valley's rapid industrial expansion and the resulting baby boom of World War II, brought increasing pressure for suburban housing.

At the time of Brookhaven Borough's incorporation on April 4, 1945, the Borough had 672 persons and 150 homes. The trolley line which had run from Chester to Media via Edgmont Avenue stopped in 1938. The trolley tracks were removed in 1945 and the road was realigned and widened as most of the area's transportation had become automotive. In the last fifty years, Brookhaven has evolved very dramatically from a dairy and stock farm economy to a residential community of over 8,500 people living in over 3,600 homes, apartments and condominiums and supporting approximately 150 businesses. 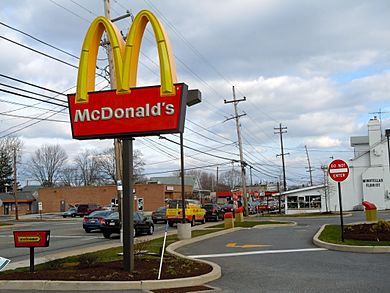 Cambridge Shopping Center, opened in 1972, is a Brookhaven landmark. It will soon be anchored by Lowe's and is currently anchored by one of the first Giant stores in the Philadelphia area. (Now closed (another Giant opened down the street)) (It was formerly anchored by Kmart (formerly W.T. Grant), which closed in October 2015, and Pathmark, which closed in November 2015.) There is now a Shoprite.

A famous haunt of Brookhaven is Tom Jones Restaurant, which was sued by Tom Jones (the singer) for taking his name. The lawsuit was later dropped, and Tom Jones is still there to this day.

One of the first Walgreens in the Philadelphia area opened in Brookhaven in 1994. It was built on the site of an old Ponderosa Steakhouse. Brookhaven also was home to one of the first Shell stations in Delaware County, which converted from Texaco in 2004 (originally opened in 1981).

All content from Kiddle encyclopedia articles (including the article images and facts) can be freely used under Attribution-ShareAlike license, unless stated otherwise. Cite this article:
Brookhaven, Pennsylvania Facts for Kids. Kiddle Encyclopedia.