Built by the Philadelphia Electric Company, it is currently owned by the PECO Energy Company of the Exelon Corporation. The complex has been converted into an office building.

The original section of the Station building was built in 1916, and consists of the Boiler House with attached Coal Towers and Turbine Hall, and the Switch House. The complex was designed by architect John T. Windrim and engineer William C.L. Eglin, and featured then recent advances in generating technology and industrial construction. The principal facades were designed in the Beaux-Arts style.

Also located on the property is the two-story, red brick Machine Shop building. It was also built by the Philadelphia Electric Company.

The complex was listed on the National Register of Historic Places in 2007.

The Chester Waterside Station was documented by the federal HAER−Historic American Engineering Record, with extensive exterior and interior photography by renowned architectural photographer Jack Boucher in 1997 and 1998; architectural drawings; and a detailed descriptive report of the facility design and history, and its contemporary industrial history contexts. 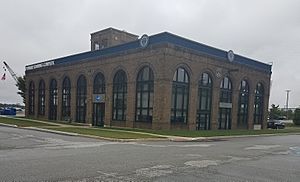 In 2016, the machine shop was converted into a 16,500 square foot indoor training facility and offices for the Philadelphia Union Major League Soccer club.

All content from Kiddle encyclopedia articles (including the article images and facts) can be freely used under Attribution-ShareAlike license, unless stated otherwise. Cite this article:
Chester Waterside Station of the Philadelphia Electric Company Facts for Kids. Kiddle Encyclopedia.