Havertown is a residential suburban unincorporated community in Haverford Township, Delaware County, Pennsylvania, United States, approximately 9 miles west of the center of Philadelphia. Havertown's ZIP Code is 19083 and "Havertown" is a postal address. The name "Havertown" does not appear until the advent of the ZIP Code in the early 1960s. Prior to the ZIP Code's introduction, each constituent community was known by its local name: Bon Air, Brookline, Penfield, Beechwood, Llanerch, Manoa, Oakmont, Coopertown, Ardmore. Under William Penn's land divisions these communities were part of the Welsh Tract and comprised the area known as Harford, a Welsh contraction of Haverford.

Havertown’s rich history began with Haverford Township's founding by Welsh Quakers in 1681 on land purchased by William Penn. The town is home to many historic sites, such as the Grange Estate, a mansion that entertained the Revolutionary War figures George Washington and General Lafayette. Nitre Hall, also located within the town’s borders, supplied the United States with over 800,000 pounds of gunpowder during the War of 1812. Other Havertown sites listed on the National Register of Historic Places include the Federal School and Lawrence Cabin. The namesake of Haverford and Havertown is Haverfordwest, Wales, UK.

Havertown is also known for its large Irish-American population. Many Irish-Americans still live there today. According to the 2000 US Census, Haverford Twp. ranks in the top 60 of census-recognized municipalities nationwide in percentage of population with Irish ancestry. The neighborhood takes pride in its distinct Irish heritage and is home to many Irish pubs and shops. Many locals still reverentially (and only half-jokingly) refer to Havertown as the "33rd county" (of Ireland). For these reasons the neighborhood remains a very popular destination for Irish immigrants. Of the 51,560 residents, 11,182 noted "Irish" as their first reported ancestry.

Havertown is notable for being the birthplace of Swell Bubble Gum, which closed its doors in late 2004, and was demolished in 2011. In 2013, the site became the home of the new Haverford Area YMCA.

Havertown is home to over 30 outdoor parks and playing fields. The town also provides other recreation facilities, including the Haverford Township Free Library, and the Haverford Township Skatium, a multi-use ice rink for Havertown residents. The recently renovated Haverford Reserve boasts a community park for the ultimate recreation experience, with over 5 miles of trails, wetlands, old forests and wildlife habitat, along with a state-of-the-art environmental lab. Haverford Reserve also includes playing fields, the freedom playground, and a dog park. Part of Haverford Reserve, the Haverford Township Community Recreation & Environmental Center (CREC) opened its doors to residents of Haverford and Havertown. The $7.4 million, geothermal-powered, LEED-certified building includes a double gymnasium, walking track, multi-use rooms, fitness rooms, and an environmental nature area. Further, CREC offers a variety of classes for people of all ages and abilities, ranging from yoga and spinning, to art and cooking classes. Where the CREC stands was once a coal power plant that provided power for the hospital buildings on the grounds of the former Haverford State Hospital. The hospital closed in 1998, and Haverford Township purchased the 209-acre site from the state in 2002. In 2006, the Township sold 40 acres for private development and used the proceeds from that sale toward the cost of constructing the CREC and developing the site's outdoor facilities.

The concept for the Haverford Music Festival was introduced by the Haverford Township Civic Council (HTCC), a private, non-profit organization that funds historic, environmental, business, and community initiatives in Haverford Township. Inspired by the Philadelphia Folk Festival, Bethlehem Musikfest and other music festivals in the area, the all-day, family-oriented Haverford Music Festival has taken place annually in the Oakmont Business District of Havertown since 2011. In 2012, the festival attracted more than 15,000 people, who enjoyed over 30 bands on three stages. HTCC benefits from festival proceeds and uses to fund community-based programs within Haverford Township. Proceeds from the 2011 Music Festival were given to the Haverford Partnership for Economic Development (HPED) for Oakmont Business District Beautification.

Havertown has a Superfund site caused by the National Wood Preservers wood treatment facility, which was in operation from 1947 to 1991. The chemical used to treat wood at this site was dumped into the ground. The Environmental Protection Agency began remediating the site in 1976, and they completed construction of the cleanup site on September 16, 2010. The groundwater continues to be extracted and treated on a continuous basis. Although approximately 26,000 people live within a mile of the site, there are no known users of the groundwater within a one-mile radius of the site. The nearby population is on the public water supply. 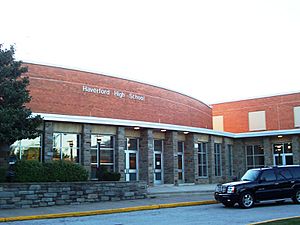 Havertown is served by the School District of Haverford Township, which has one high school, one middle school, and five elementary schools. A newly refurbished elementary school, Chestnutwold Elementary, re-opened its doors in early September 2008. It replaced Oakmont Elementary, which became home to the district offices. In 2009, Manoa Elementary School moved from Manoa Road to the intersection of Manoa and Eagle Roads, taking part of the field that had been there for many years. The Haverford High School sports teams are called the "Fords," and have a Model T Ford as mascot.

Cardinal John Foley Regional School is the area Catholic school. It formed in 2012 from a merger of Annunciation B.V.M. and St. Denis Catholic schools.

All content from Kiddle encyclopedia articles (including the article images and facts) can be freely used under Attribution-ShareAlike license, unless stated otherwise. Cite this article:
Havertown, Pennsylvania Facts for Kids. Kiddle Encyclopedia.