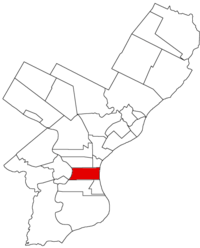 Center City includes the central business district and central neighborhoods of Philadelphia, in the U.S. state of Pennsylvania. It is the former City of Philadelphia prior to the Act of Consolidation, 1854 which extended the city borders to be coterminous with Philadelphia County. Greater Center City has grown into the second-most populated downtown area in the United States, after Midtown Manhattan in New York City, with an estimated 183,240 residents in 2015. 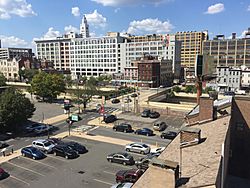 Center City is bounded by South Street to the south, the Delaware River to the east, the Schuylkill River to the west, and Vine Street to the north. This means that Center City occupies the boundaries of the city before it was made coterminous with Philadelphia County in 1854. The Center City District, which has special powers of taxation, uses a complicated, irregularly shaped boundary that includes much but not all of this area, and also extends beyond it. The Philadelphia Police Department patrols three districts located within Center City. The three patrol districts serving Center City are the 6th, 9th, and 17th districts. 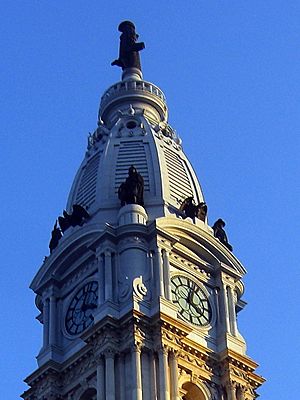 Center City is home to most of Philadelphia's tallest buildings, including Philadelphia's City Hall, the second tallest masonry building in the world and until 1987 the tallest in Philadelphia, as well as the tallest building in the world for seven years. In March 1987, One Liberty Place broke the gentlemen's agreement not to exceed the height of the statue of William Penn atop City Hall. Since the completion of One Liberty Place, no Philadelphia major-league sports team had won a world championship for the next two decades, a phenomenon known as the "Curse of Billy Penn." In an effort to reverse the curse, a 3-foot statue of Penn was affixed to the top of the Comcast Center upon its completion as the city's new tallest building in 2007. On October 29, 2008, the Philadelphia Phillies won the 2008 World Series, effectively ending the "curse" 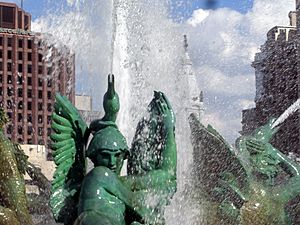 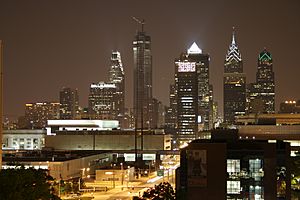 Seven other skyscrapers now exceed the height of Penn's statue, including One Liberty Place's little sister, Two Liberty Place. The Comcast Center, which was completed in 2007, is now the tallest building in Pennsylvania, 30 feet taller than One Liberty Place. Two buildings now under construction — 1441 Chestnut and the Comcast Technology Center — are also slated to be taller than City Hall. The latter would be the eighth-tallest building in the Western Hemisphere, and the tallest outside of Manhattan and Chicago. The first publicly accessible vantage point higher than City Hall opened at One Liberty Observation Deck on the 57th floor of One Liberty Place in 2015.

Other Center City skyscrapers include the BNY Mellon Center and the Three Logan Square, which houses a traffic camera used by the Philadelphia branch of the Westwood One MetroNetworks traffic service.

Across the street from City Hall is the Masonic Temple, the headquarters of the Grand Lodge of Pennsylvania, a legacy of the Founding Fathers and signers of the Declaration of Independence, many of whom were Freemasons; such luminaries include George Washington and Benjamin Franklin.

While Philadelphia's population declined, Center City's rose 10% between 1990 and 2000.

In 2007, the city designated the area bound by 11th Street, Broad Street, Chestnut Street and Pine Street as the Gayborhood. 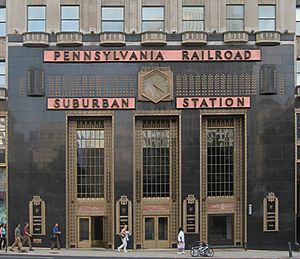 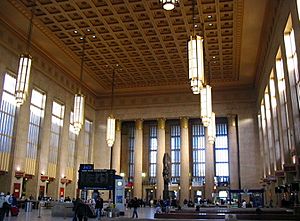 As of 2016[update] Taiwanese airline China Airlines provides a private bus service to and from John F. Kennedy International Airport in New York City for customers based in the Philadelphia area. This service stops in Center City in front of the Marriott Hotel.

All content from Kiddle encyclopedia articles (including the article images and facts) can be freely used under Attribution-ShareAlike license, unless stated otherwise. Cite this article:
Center City, Philadelphia Facts for Kids. Kiddle Encyclopedia.