Pennsylvania Hospital is a private, non-profit, 515-bed teaching hospital located in Center City Philadelphia and is part of the University of Pennsylvania Health System. Founded on May 11, 1751, by Benjamin Franklin and Dr. Thomas Bond, Pennsylvania Hospital is one of the earliest established public hospitals in the United States. It is also home to America's first surgical amphitheatre and its first medical library. The hospital's main building, dating to 1756, is a National Historic Landmark. 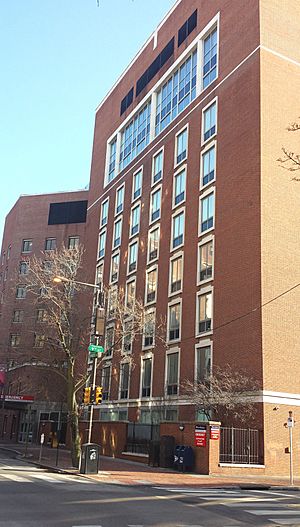 The emergency room entrance at Pennsylvania Hospital, as seen from 9th and Spruce

Pennsylvania Hospital was originally conceived in 1751 by Dr. Thomas Bond as an institution "for the reception and cure of the sick poor...free of charge. It was funded by "matching grant" to donations of the people of Philadelphia by a Bill which the House passed unanimously on 7 February 1750. Franklin went on to later write: "I do not remember any of my political Manoeuvres, the Success of which gave me at the time more Pleasure." On September 2, 1751, Mathias Koplin donated the first plot of ground for the new hospital. The first (temporary) building was opened on February 6, 1752, on High Street (now Market Street). Elizabeth Gardner, a Quaker widow, was appointed Matron of the hospital. As the hospital received support of the leading families in Philadelphia, its permanence was secured, and Samuel Rhoads was appointed architect of the new building.

Thomas Stretch was among the leading citizens of Philadelphia and one of the founders of Pennsylvania Hospital. He was a member of the Union Fire Company, also known as Benjamin Franklin's Bucket Brigade and a founder of the social club known as Schuylkill Fishing Company, and the club's first governor in 1732, re-elected annually until his death in 1765. Stretch was a director of the Philadelphia Contributionship (Hand-in-Hand fire mark) from 1758 to 1761.

In 1755, the cornerstone was laid for the East Wing of what would become the hospital's permanent location at 8th and Pine Streets. All of the patients were transferred from the temporary hospital to the permanent hospital on December 17, 1756. The first admission of a new patient occurred on the following day. The site continued to grow through the years with the addition of more wings (such as the West Wing of the building which was built in 1796) and buildings, extra land, and further expansion.

While attending clinics in the Pennsylvania Hospital in November 1869, the first time women students attended the hospital, Anna Lukens and a Miss Brumall led a line of women students out of the hospital grounds amid hisses, jeers, insults, and thrown stones and mud from male students.

Pennsylvania Hospital gained a reputation as a center of innovation and medical advancement, particularly in the area of maternity. It was a teaching hospital from its very beginning, when Bond would lead rounds through what is now the east wing of the main building. In its early years it was also known for its particularly advanced and humane facilities for mentally ill patients (at a time when mental illness was very poorly understood and patients were often treated very badly). Care of the mentally ill was removed to West Philadelphia in 1841 with the construction of the Pennsylvania Hospital for the Insane, later known as The Institute of the Pennsylvania Hospital. Under superintendent Thomas Story Kirkbride, the hospital developed a treatment philosophy that became the standard for care of the mentally ill in the 19th century.

In 1950, Pennsylvania Hospital was recognized for becoming more highly specialized as it established, in addition to its sophisticated maternity programs, an intensive care unit for neurological patients, a coronary care unit, an orthopaedic institute, a diabetes center, a hospice, specialized units in oncology and urology and broadened surgical programs.

The hospital has served as a center for treating the war wounded. Patients were brought to the hospital for treatment in the Revolutionary War, the American Civil War and the Spanish–American War, and units from the hospital were sent abroad to treat wounded in World War I and in World War II (to the Pacific theater).

The seal of the hospital, chosen by Franklin and Bond, incorporates the story of the Good Samaritan; the phrase "Take Care of Him and I will repay Thee" is used on it.

In 1997, Pennsylvania Hospital's Board of Managers made the decision to merge with the University of Pennsylvania Health System. The large health system helps to support the formerly stand-alone hospital with its network of resources.

In 1762, the first book for the hospital's medical library was donated by John Fothergill, a British friend of Franklin's. In 1847, the American Medical Association designated the library as the first, largest, and most important medical library in the United States. That year, in 1847, the library contained about 9,000 volumes. The collection now contains over 13,000 volumes dating back to the 15th century—including medical and scientific volumes as well as books on natural history. The library includes the nation's most complete collection of medical books published between 1750 and 1850. The collection also contains several incunabula, books written before 1501, when the printed process was invented. 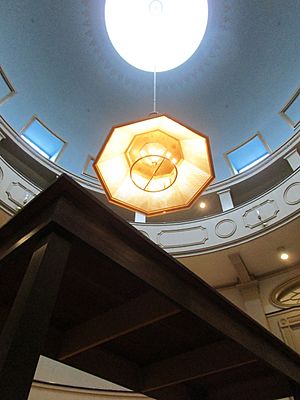 The top floor of Pennsylvania Hospital is the home of the nation's oldest surgical amphitheater, which served as the operating room from 1804 through 1868. Surgeries were performed on sunny days between 11:00 am and 2:00 pm since there was no electricity at the time. The surgical amphitheater seats 180 and with those standing, up to 300 people might be present during any given surgical operation.

The Board of Managers first proposed the Physic Garden in 1774 to provide physicians with ingredients for medicines. The idea was approved, but financial circumstances intervened and the project was delayed for two centuries. In 1976, the planting of the garden was the bicentennial project of the Philadelphia Committee of the Garden Club of America and the Friends of Pennsylvania Hospital. Located in front of the Pine Building's West Wing, the garden has plants that were once used for medicines to stimulate the heart, ease toothaches, relieve indigestion, and cleanse wounds in the 18th century.

Pennsylvania Hospital is noted for its many firsts in the area of women's medicine, especially in maternity. In 1803, the hospital established a "lying-in" (or maternity) department. This lasted until 1854 when obstetrics and gynecology took a 75-year break at the hospital. The specialties were reinstated in 1929 with the opening of the Woman's Building (now the Spruce Building) which sported 150 adult beds, 80 bassinets, 2 operating rooms, a series of labor and delivery rooms, and outpatient clinics. It was considered "one of the most modern hospital buildings in the country" especially at a time when women's medicine was not thought to be very important and most births were still done at home. This was followed in 1978 with the first Antenatal Testing Unit (ATU) in the region and in 1985 when the first GIFT (Gamete IntraFallopian Transfer) pregnancy in Philadelphia was achieved at the hospital. In 1987, Pennsylvania Hospital achieved two obstetrical firsts: the first birthing suite in a tertiary care hospital in the state was opened, and the first gestational carrier and egg donor programs in the Delaware Valley were begun to complement the hospital's existing fertility services. In 1995, the hospital was the first in the region to achieve 1,000 live births from in-vitro fertilization, GIFT, and other assisted reproductive technologies.

All content from Kiddle encyclopedia articles (including the article images and facts) can be freely used under Attribution-ShareAlike license, unless stated otherwise. Cite this article:
Pennsylvania Hospital Facts for Kids. Kiddle Encyclopedia.