The Pennsylvania Convention Center is a multi-use public facility in the Market East section of Philadelphia, Pennsylvania, designed to accommodate conventions, exhibitions, conferences and other events. The "L"-shaped complex occupies four city blocks.

In the latter part of the 20th century, the Philadelphia Civic Center became outmoded. With the opening of the Spectrum in South Philadelphia, fewer big sporting and entertainment events used the Civic Center. Political conventions, too, outgrew the capacity of the Civic Center to host them. By the 1980s, regional and state leaders had begun to plan for a new convention center in the heart of Center City. The Pennsylvania Convention Center opened in 1993 and when it did, most of the Events held in the Civic Center, including trade shows and the annual Philadelphia Flower Show, moved to the new facility.

As a result of the construction of the Pennsylvania Convention Center, the Chinatown buildings located on Arch Street, up to the intersection of 13th Street, were demolished. 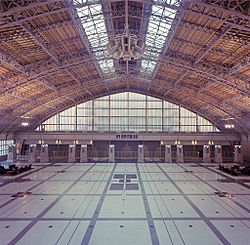 The Pennsylvania Convention Center comprises four main halls or rooms, smaller meeting rooms and auditoriums, and the Grand Hall, which occupies much of the trainshed of the former Reading Railroad terminal. (The rest of the train shed is occupied by meeting rooms and a hallway on the main floor, and the Grand Ballroom on the upper floor.) The headhouse entrance to the Convention Center is located at 12th and Market Streets in Center City. The A, B, and C exhibit halls extend across 12th Street, one story up (the 200 level) from the street level (100 level), between 11th and 13th Streets and Arch and Race Streets. At the south side of the A exhibit hall, a walkway extend over Arch Street, south into the grand hall. The opposite end of the grand hall provides a gated entrance into the headhouse lobby for the Marriott Hotel that occupies the old office spaces of Reading Railroad. Access to an adjoining Marriott Hotel is gained from this lobby by means of another second-story walkway over 12th Street.

The hotel, designed by BLT Architects with completion in 1995, is connected to the Market East Transportation Center via a skybridge to the historic Reading Terminal. The 1,200-room hotel also offers restaurants, a health/fitness center, and various-sized ballrooms and pre-function areas for meetings, convention activities, and other public and private events. In 1999, designs by BLT Architects to expand the Marriott Hotel at the Pennsylvania Convention Center were completed. The upper seven floors of the historic Reading Terminal Headhouse, designed by the Wilson Brothers in 1894, provided space to expand the Marriott's conference capabilities with a 210 unit suites-type hotel featuring terraced restaurants and other public spaces. The grand ballroom occupies the Reading Railroad Company’s original waiting room. 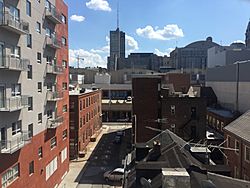 Reading Terminal consists of three parts. The headhouse, a 9-story office building fronting on Market Street, that contained the passenger station and the Reading Railroad company headquarters. It was designed in 1891 by New York architect Francis H. Kimball. The trainshed, directly north of the headhouse, was designed by the Philadelphia architecture/engineering firm of Wilson Brothers & Company. The tracks were raised on a viaduct and entered the great arched shed about 20 feet (6.1 m) above street level. Its single-span arched roof structure is touted as the world's oldest surviving. Reading Terminal Market, which had prior rights to the railroad's right-of-way for the property use, was built below the trainshed. The terminal opened in 1893 and served to enhance the railroad company's power and prominence, and contributed to the city's importance.

When Reading Company ceased to exist as a railroad owner and operator, it sold the headhouse and train shed to SEPTA, the regional rail service. SEPTA operated its regional trains out of the shed until 1984, when they developed an underground station that bypassed the terminal by running under it, and the facility fell into disuse (except for the Reading Terminal Market).

City and state officials pondered on a means to reuse the facility, and formed a convention center authority. Public reaction to redevelopment prompted the new authority to preserve the market and the train shed in its design of the new convention center. It currently oversees the operation and maintenance of the convention center. 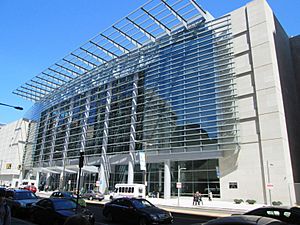 The new Broad Street facade of the Convention Center

All content from Kiddle encyclopedia articles (including the article images and facts) can be freely used under Attribution-ShareAlike license, unless stated otherwise. Cite this article:
Pennsylvania Convention Center Facts for Kids. Kiddle Encyclopedia.