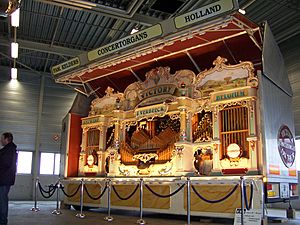 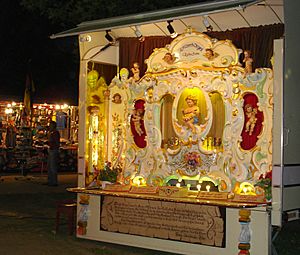 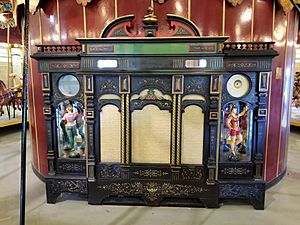 The Frati & Co. Band Organ at the Lakeside Park Carousel in Port Dalhousie, ON.

A fairground organ is a pipe organ designed for use in a commercial public fairground setting to provide loud music to accompany fairground rides and attractions, mostly used on merry-go-rounds. Unlike organs intended for indoor use, they are designed to produce a large volume of sound to be heard over and above the noise of crowds of people and fairground machinery.

As fairgrounds became more mechanised at the end of the nineteenth century, their musical needs grew. The period of greatest activity of fairground organ manufacture and development is from the later 1880s to the introduction of effective electrical sound amplification in the mid-1920s. The organ chassis was typically provided with an ornate and florid decorative case façade designed to be a further fairground attraction in its own right as with all fairground equipment.

The ornate case façades frequently had different instruments such as a Glockenspiel or drums that provided visual entertainment as they played. There were often ornate human figures such as a conductor whose arm moved in time to the music or women whose arms would strike bells. The mechanics to accomplish this motion were quite intricate and provided a pleasant visual experience in addition to the music.

The organs were constructed so as to be able to produce the popular music of the period. Organs were designed to mimic the musical capabilities of a typical human band. For this reason they are known as band organs in the United States.

The motive force for a fairground organ is typically wind under pressure generated from mechanically powered sets of bellows mounted in the base of the instrument. The instruments, designed to be operated without a human performer, are keyboard-less apart from a few one-off examples. The organ is played mechanically by either a rotating barrel with the music pinned thereon like a music box, a strip of cards perforated with the musical data and registration controls called book music, or interchangeable rolls of paper similarly programmed called music rolls. However, Victory, pictured above, while a traditional mechanism plays traditional books, it also contains a Yamaha MIDI interface and is most often played electronically - with a blank card in place of the traditional book. Owner, Willem Kelders, uses this interface to link organs (Rhapsody and Locomotion - driven by Victory) together so they all play the same music perfectly synchronised.

Fairground organs were used in many settings such as general fairground rides, static side shows such as bioscope shows and various locations in amusements parks such as ice rinks and the like.

Manufacturers of fairground organs also typically made instruments for indoor usage in a dance hall called a dance organ and travelling street use called a street organ.

Like all mechanical instruments, fairground organs come in a vast array of sizes and technical specifications made by a myriad of manufacturers all of which had their own trademark characteristics. As with all vintage equipment there is a strong preservation movement associated with these instruments and today new instruments and music are still being made. 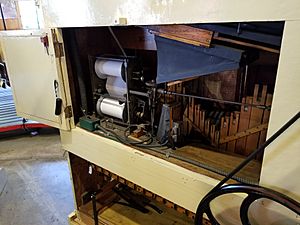 The roll-playing mechanism on the Wurlitzer 146 band organ at the Herschell Carrousel Factory Museum in North Tonawanda, NY. 150 Scale.

Early organs were designed to be compact and operated by an unskilled person or mechanically. These were played via an integral pinned barrel requiring no human input apart from changing the number of the tune being played. These had a fixed repertoire and, if it was desired to change the tunes, a complete new pinned barrel was required. To offer a more flexible choice of repertoire, a system of robust interchangeable perforated cardboard book music was adopted first by Parisian manufacturers Gavioli. Their system became widely regarded as commercially advantageous and other manufacturers followed suit. Book music offered a cheaper and more readily updated alternative to barrel music. Also used by many manufacturers including Gavioli was operation via paper music roll. These rolls were more compact and cheaper to manufacture than book music. Technically, they were more susceptible to poor handling but all systems experienced their own types of characteristic wear and tear during repeated playing. Both "book" and "roll" systems were manufactured with different operating actions which read the music via air pressure, under suction, or mechanically. To extend longevity, mechanically read cardboard book music was typically strengthened with an application of shellac. Music rolls were typically fortified via the use of robust moisture-resisting paper stocks.

All the functions of the organ are (apart from the smallest instruments) operated automatically from the music media. Larger instruments contain automatic organ stop register control and additional control tracks for operating percussion instruments, lighting effect and automaton figures.

All content from Kiddle encyclopedia articles (including the article images and facts) can be freely used under Attribution-ShareAlike license, unless stated otherwise. Cite this article:
Fairground organ Facts for Kids. Kiddle Encyclopedia.