Tuscarawas County (TUS-kə-RAH-wəss) is a county located in the eastern part of the U.S. state of Ohio. As of the 2010 census, the population was 92,582. Its county seat is New Philadelphia. Its name is a Delaware Indian word variously translated as "old town" or "open mouth".

For years, European-American colonists on the East Coast did not know much about the territory west of the Appalachian Mountains except for reports from a few explorers and fur traders who ventured into the area. In 1750, Christopher Gist of the Ohio Land Company explored the Tuscarawas Valley. His report of the area hinted at some natural riches and friendly American Indians.

In 1761 Moravian missionaries set out from Bethlehem, Pennsylvania to set up a mission in the Tuscarawas Valley. Christian Frederick Post, David Zeisberger, and John Heckewelder met with Chief Netawatwees of the western Delaware Indians, also known as the "Lenape". He invited them to the tribal village he had founded, Gekelemukpechunk (present-day Newcomerstown, Ohio). He granted the missionaries permission to build a cabin near the junction of the Sandy Creek and Tuscarawas River, in present-day Stark County and begin Christianizing the natives. While they were successful in baptizing dozens of converts, they were forced to abandon the mission in 1763 during the French and Indian War (part of the Seven Years' War).

Again, at the request of Chief Netawatwees in 1771, David Zeisberger returned to found additional missions in the Tuscarawas Valley. In the spring of 1772, near the present site of New Philadelphia, Ohio, Zeisberger, along with five converted Indian families established the mission of Schoenbrunn (beautiful spring). They built a school house and a chapel. In August of that year, John Heckawelder brought an additional 250 converted Delaware Christians into the village.

In late summer 1772, they established a second settlement, roughly 10 miles away from Schoenbrunn, called Gnadenhütten (cabins of grace). On October 17, 1772, Zeisberger conducted the first religious service at Gnadenhutten. In 1776, Chief Netawatwes donated land for another settlement, Lichtenau (meadow of light), near present-day Coshocton, then the principal Delaware village in the region.

The American Revolutionary War brought the demise of these first settlements. The Delawares, who at the time populated much of eastern Ohio, were divided over their loyalties, with many in the west allied with the British out of Fort Detroit and many in the east allied with the Americans out of Fort Pitt. Delawares were involved in skirmishes against both sides, but by 1781 the American sense was that the Delawares were allying with the British. In response, Colonel Daniel Brodhead of the American forces led an expedition out of Fort Pitt and on 19 April 1781 destroyed the settlement of Coshocton. Surviving residents fled to the north. Colonel Brodhead's forces left the Delawares at the other Moravian mission villages unmolested, but the actions set the stage for raised tensions in the area.

In September 1781, British forces and Indian allies, primarily Wyandot and Delaware, forced the Christian Indians and missionaries from the remaining Moravian villages. The Indian allies took their prisoners further west toward Lake Erie to a new village, called Captive Town, on the Sandusky River. The British took the missionaries David Zeisberger and John Heckewelder under guard back to Fort Detroit, where the two men were tried (but eventually acquitted) on charges of treason against the British Crown.

The Indians at Captive Town were going hungry because of insufficient rations, and in February 1782, more than 100 returned to their old Moravian villages to harvest the crops and collect the stored food they had been forced to leave behind. In early March 1782, 160 Pennsylvania militia led by Lieutenant Colonel David Williamson raided the villages and garrisoned the Indians in the village of Gnadenhütten, accusing them of taking part in raids into Pennsylvania. Although the Delawares denied the charges, the militia held a council and voted to kill them. The next morning on 8 March, the militia tied up the Indians. In all, the militia murdered 28 men, 29 women, and 39 children. They burned the village down. They also burned the other abandoned Moravian villages in the area.

This action, which came to be known as the Gnadenhutten massacre, caused an outright frontier war to break out between the Delawares and the Americans. After several years of ongoing campaigns by the natives to terrorize and keep out further American settlers, a brutal campaign by US General "Mad Anthony" Wayne from Fort Washington (now Cincinnati) was carried out in late 1793, eventually resulting in the Treaty of Greenville being signed in 1795 between the US government and the local natives. The Treaty ceded the eastern ⅔ of current-day Ohio to white settlers and once again opened up the territory for white settlement.

In October, 1798, David Zeisberger, the same Moravian missionary who had founded many of the original missions in the 1770s, returned to the Tuscarawas Valley to found a new mission, Goshen, from where he continued his work to Christianize the local natives. Over the next several years, farmer settlers from Pennsylvania came trickling into the area, and by 1808, the first permanent settlement, New Philadelphia, was founded near the Goshen mission. After the War of 1812, Goshen declined as a mission until it was disbanded in 1824.

Tuscarawas County was formed from Muskingum County on Feb. 15, 1808. 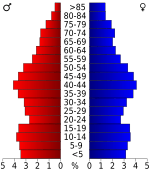 Age pyramid of Tuscarawas County, based on 2000 census information. 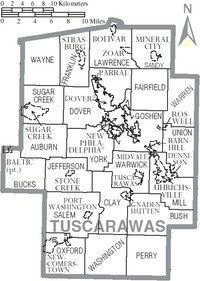 Map of Tuscarawas County, Ohio With Municipal and Township Labels

All content from Kiddle encyclopedia articles (including the article images and facts) can be freely used under Attribution-ShareAlike license, unless stated otherwise. Cite this article:
Tuscarawas County, Ohio Facts for Kids. Kiddle Encyclopedia.