Kids Encyclopedia Facts
Not to be confused with Harrison, Ohio. 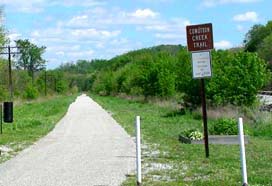 Harrison County is a county located in the U.S. state of Ohio. As of the 2010 census, the population was 15,864, making it the fifth-least populous county in Ohio. Its county seat is Cadiz. The county is named for General William Henry Harrison, who was later President of the United States.

Harrison County was formed from parts of Jefferson and Tuscarawas Counties in 1813. The county was named after General William Henry Harrison, the hero of the battle of Tippecanoe in the War of 1812 <(and later to become the 9th US President).

On May 16, 2013 the Chicago Tribune Business section reported that the Utica Shale underlying Harrison County shows promise as a tight oil production zone. To produce tight oil in large quantities would require horizontal drilling and fracturing of the shale formation as is being done in North Dakota and Texas.

The Conotton Creek Trail is a rails-to-trails path that runs along Conotton Creek from Bowerston to Jewett in northern Harrison County, Ohio. The paved multi-use trail is 11.4 miles or 18.3 kilometers long. 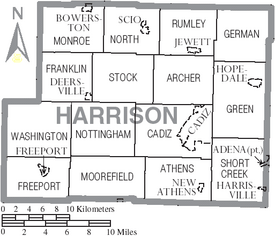 Map of Harrison County, Ohio with Municipal and Township Labels

All content from Kiddle encyclopedia articles (including the article images and facts) can be freely used under Attribution-ShareAlike license, unless stated otherwise. Cite this article:
Harrison County, Ohio Facts for Kids. Kiddle Encyclopedia.