Scio is a village in Harrison County, Ohio, United States. The population was 763 at the 2010 census.

Scio was originally called New Market, and under the latter name was platted in 1852.

According to the United States Census Bureau, the village has a total area of 0.56 square miles (1.45 km2), all land. 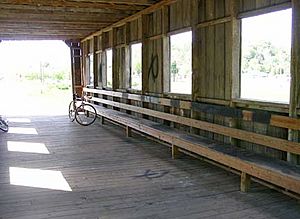 Inside the community's covered bridge

There were 324 households, of which 32.4% had children under the age of 18 living with them, 36.7% were married couples living together, 17.3% had a female householder with no husband present, 5.9% had a male householder with no wife present, and 40.1% were non-families. 37.0% of all households were made up of individuals, and 16% had someone living alone who was 65 years of age or older. The average household size was 2.35 and the average family size was 3.01.

Scio is the midpoint of the multi-use rails-to-trails path, the Conotton Creek Trail. The trail runs along Conotton Creek and is 11.4 miles (18.3 km) long. It is paved and suitable for bicycling, roller blading, wheel chairing and walking.

From 1877 or 1878 to 1911 the Scio College was in the town, until it merged with Mount Union College and the Scio campus closed.

Scio has a public library, a branch of the Puskarich Public Library .

All content from Kiddle encyclopedia articles (including the article images and facts) can be freely used under Attribution-ShareAlike license, unless stated otherwise. Cite this article:
Scio, Ohio Facts for Kids. Kiddle Encyclopedia.