Bowerston is a village in Harrison County, Ohio, United States. The population was 398 at the 2010 census.

The village of Bowerston was settled in the early 19th century by Barnhard Bower and his brother John. When they first moved to the area, two mills were already built on the south side of Conotton Creek. One mill was a sawmill, the other a gristmill, and in 1804, the Bower brothers began to rebuild the mills. In 1816, the settlement called Bower's Mills was laid out and later it was called Bowersville and finally Bowerston. Bowerston was platted by David Bower, Henry Hoover, and Nathaniel Bower on August 21, 1851 and was filed in court August 2, 1852. The village was incorporated April 2, 1883.

According to the United States Census Bureau, the village has a total area of 0.51 square miles (1.32 km2), all land.

There were 156 households, of which 30.8% had children under the age of 18 living with them, 42.9% were married couples living together, 9.0% had a female householder with no husband present, 7.1% had a male householder with no wife present, and 41.0% were non-families. 37.8% of all households were made up of individuals, and 17.3% had someone living alone who was 65 years of age or older. The average household size was 2.26 and the average family size was 2.99.

Bowerston is the beginning of the multi-use rails-to-trails path, the Conotton Creek Trail, along Conotton Creek. The trail is 11.4 miles (18.3 kilometers) long. It starts at the eastern end of Bowerston, at the southeast end of Erie Street. It is paved and suitable for bicycling, roller blading, wheel chairing and walking. 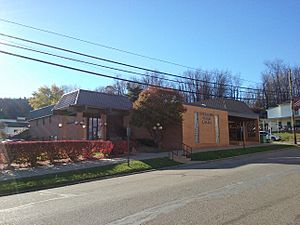 The village has a lending library, the Bowerston Public Library.

All content from Kiddle encyclopedia articles (including the article images and facts) can be freely used under Attribution-ShareAlike license, unless stated otherwise. Cite this article:
Bowerston, Ohio Facts for Kids. Kiddle Encyclopedia.