Kids Encyclopedia Facts
Not to be confused with Camp Dennison, Ohio. 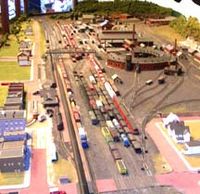 Dennison is a village in Tuscarawas County, Ohio, United States. The population was 2,655 at the 2010 census.

The confluence of coal and railroads drove the development of Dennison. It is conveniently located at the midpoint between Pittsburgh and Columbus -- 100 miles (160 km) from each. At the time, locomotives needed water every 100 miles (160 km), so Dennison was a natural refilling location. The Dennison Coal Company had mines south of town.

In 1864, The Pittsburgh, Cincinnati & St. Louis Railway decided to locate the country's largest railroad shops and yards in Dennison. Dennison Land Company laid out the town of Dennison in 1865 and purchased land expressly for the town. The railyards spanned 40 acres (160,000 m2). Demand for passenger service led to construction of a station in 1873. Thousands moved to the area for jobs in the roundhouses, turntables and foundries. At its peak, 3,000 people worked in the railyards. The Pennsylvania Railroad Company eventually subsumed the Pittsburgh, Cincinnati & St. Louis Railway.

The village incorporated in 1873, and was named for governor William Dennison.

During World War I, the Red Cross operated a canteen from a boxcar. Canteen volunteers prepared coffee and sandwiches for troops traveling through by train.

In 1922, a strike marked the end of the golden era of Dennison. During World War II, the Dennison Canteen operated from March 19, 1942 to April 8, 1946. Initially in a gas station on Center and Fifth Street, it moved to the depot restaurant and was dubbed "Dreamsville".

In the 1980s, Dennison elected Greg DiDonato as a member of council (while he was still a high school student) and then elected him mayor. He went on to serve as Ohio State Representative, Ohio State Senator and minority leader of the Ohio Senate.

According to the United States Census Bureau, the village has a total area of 1.35 square miles (3.50 km2), all land.

The 1873 station is now renovated into a railroad history museum. It features an N-scale model of the historic railyard.

All content from Kiddle encyclopedia articles (including the article images and facts) can be freely used under Attribution-ShareAlike license, unless stated otherwise. Cite this article:
Dennison, Ohio Facts for Kids. Kiddle Encyclopedia.