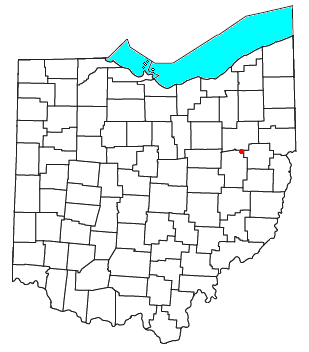 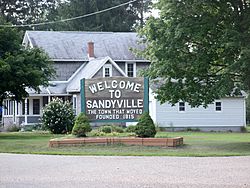 Sandyville is an unincorporated community in northern Sandy Township, Tuscarawas County, Ohio, United States. It has a post office with the ZIP code 44671. It lies along State Route 800 between Canton and New Philadelphia.

Among the notable residents of Sandyville was Graydon Evans, a World War II test pilot who was killed in the crash of an experimental airplane in 1943. Another notable resident of Sandyville was Joseph R. Antenora who was the Executive Director and later the first Commissioner of The Professional Bowlers Association (PBA) and the Professional Bowler's Tour.

Sandyville was laid out and platted in 1815. The community takes its name from nearby Sandy Creek. A post office called Sandyville has been in operation since 1816.

All content from Kiddle encyclopedia articles (including the article images and facts) can be freely used under Attribution-ShareAlike license, unless stated otherwise. Cite this article:
Sandyville, Ohio Facts for Kids. Kiddle Encyclopedia.