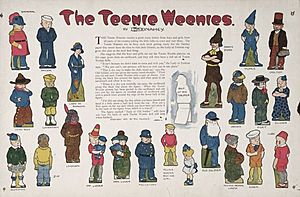 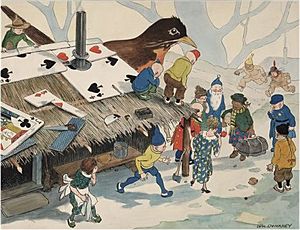 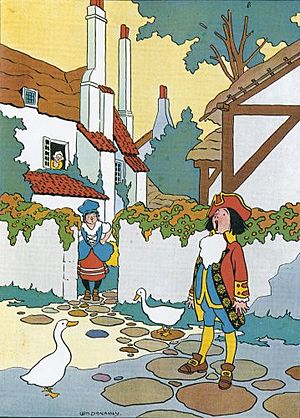 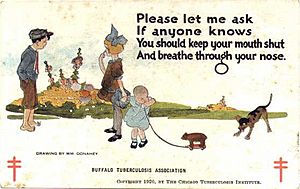 William Donahey (19 October 1883 – 1 February 1970) was a U.S. cartoonist and creator of The Teenie Weenies, a comic strip about two-inch-tall people living under a rose bush. The strip appeared in the Chicago Tribune for over 50 years. He drew The Teenie Weenies for a total of about 2100 strips.

Donahey was a very shy child when growing up. He would dream up imaginary characters and The Teenie Weenies as a pastime. He later turned them into a profession in the form of comic features in newspapers, books and advertising.

Donahey spent much of his childhood alone because he was introverted. One of his pastimes was imagining strange creatures in a small world. He later claimed this was the birth of The Teenie Weenies. His parents, John C. Donahey and Catherine (Chaney) Donahey, noticing his creative work, enrolled him in the Cleveland School of Art. They had hoped that he would follow his older brother James Harrison "Hal" Donahey (1875–1949) into the illustration business. Donahey graduated from college in 1903, worked briefly in advertising and then joined the staff of Cleveland's The Plain Dealer, where his brother Hal was the political cartoonist.

When Chicago Tribune editor Joseph Medill Patterson saw Donahey's artwork, he offered him a full-time job as a cartoonist for the comics section. Here is where he created The Teenie Weenies inspired by The Brownies, the popular feature by Palmer Cox. The Teenie Weenies, written and illustrated by Donahey, contrasted normal-size objects with tiny protagonists.

Donahey's stories consisted of a large illustration and accompanying text about the lives of many characters that lived beneath a rose bush with full-size objects like hats, jugs, and old boots. There was an illustrated story that involved an old rusty tomato can. The first feature appeared in black and white on June 14, 1912. Color was added in 1923 when the comic feature moved to the regular Sunday comics section.

The Teenie Weenies was syndicated in newspapers internationally, and the characters appeared in books, school primers and advertising. Donahey franchised his work for use on decals, dolls, clothing, handkerchiefs and tin boxes. He had a number of licensing agreements for his work with companies like Monarch Foods and Reid-Murdoch. He dedicated most of his work and energy however into the newspaper cartoon comic strips. Donahey was a member of the American Press Humorists and Society of Midland Authors.

William and Mary Donahey owned the Pickle Barrel House in Grand Marais, Michigan where they spent their summers. The house has been restored and now serves as a museum on the main street of Grand Marais. Donahey was close friends with Otto E. Newberg, who operated a lumber mill in Grand Marais and is the author of an unpublished book, Anatomy of Morality. One of Donahey's older brothers was Victor Donahey, the governor of Ohio from 1922 through 1929.

All content from Kiddle encyclopedia articles (including the article images and facts) can be freely used under Attribution-ShareAlike license, unless stated otherwise. Cite this article:
William Donahey Facts for Kids. Kiddle Encyclopedia.