The Brownies facts for kids

Kids Encyclopedia Facts
This page is about the drawings of Palmer Cox. For the household spirits in British folklore, see Brownie (folklore). For junior Girl Guides, see Brownie (Girl Guides). 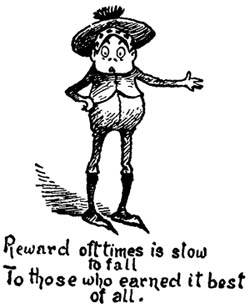 A Palmer Cox Brownie from Brownies Around the World (1894)

The Brownies is a series of publications by Canadian illustrator and author Palmer Cox, based on names and elements from English traditional mythology and Scottish stories told to Cox by his grandmother. Illustrations with verse aimed at children, The Brownies was published in magazines and books during the late 19th century and early 20th century. The Brownie characters became famous in their day, and at the peak of their popularity were a pioneering name brand within merchandising.

Brownies are little fairy- or goblin-like creatures who appear at night and make mischief and do helpful tasks. As published by Palmer Cox, they were based on Scottish folktales. 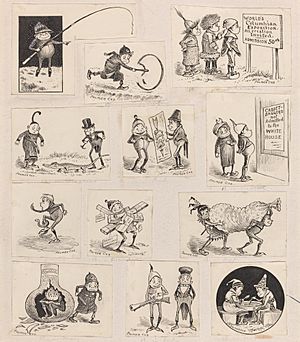 Beyond print publication, The Brownies was at least twice adapted to stage plays. With the rise in popularity of the Brownie characters, these were used in many venues of merchandising, such as games, blocks, cards, dolls, calendars, advertisements, package labels, mugs, plates, flags, soda pop, a slot machine, a bagatelle game and so forth. George Eastman applied the brand name in promotion of Kodak's "Brownie Camera", but Palmer Cox reportedly never received any money for the commercial use of his work.

All content from Kiddle encyclopedia articles (including the article images and facts) can be freely used under Attribution-ShareAlike license, unless stated otherwise. Cite this article:
The Brownies Facts for Kids. Kiddle Encyclopedia.