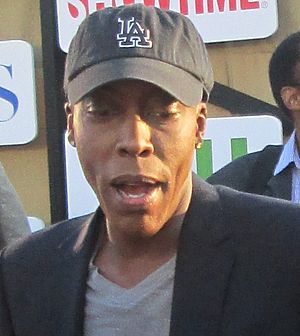 Arsenio Hall (born February 12, 1956) is an American actor and comedian. He hosted his own television talk show, The Arsenio Hall Show, from 1989 to 1994 on the Fox network. He also had his own sitcom on ABC titled, Arsenio

Hall co-starred with Eddie Murphy in the movies Coming to America and Harlem Nights. After his own television series ended, Hall sometimes guest-starred on The Tonight Show with Jay Leno.

Hall was born in Cleveland, Ohio.

All content from Kiddle encyclopedia articles (including the article images and facts) can be freely used under Attribution-ShareAlike license, unless stated otherwise. Cite this article:
Arsenio Hall Facts for Kids. Kiddle Encyclopedia.