Bowling Green was first settled in 1832, was incorporated as a town in 1855, and became a city in 1901. The village was named after Bowling Green, Kentucky by a retired postal worker who had once delivered mail there. With the discovery of oil in the late 19th and early 20th century, Bowling Green experienced a boon to its economy. The wealth can still be seen in the downtown storefronts, and along Wooster Street, where many of the oldest and largest homes were built. A new county courthouse was also constructed in the 1890s, and a Neoclassical post office was erected in 1913. This period was followed by an expansion of the automobile industry. In late 1922 or early 1923, Coats Steam Car moved to the area, but eventually went out of business.

There were 11,288 households of which 18.9% had children under the age of 18 living with them, 30.7% were married couples living together, 7.5% had a female householder with no husband present, 3.2% had a male householder with no wife present, and 58.6% were non-families. 35.8% of all households were made up of individuals and 7.2% had someone living alone who was 65 years of age or older. The average household size was 2.16 and the average family size was 2.82.

Every September, the Black Swamp Arts Festival takes place in Bowling Green. Started in 1993, the festival has grown in size and prestige.

The name Black Swamp was chosen for the festival because it is a common term for this area of the state. The Great Black Swamp, which was drained near the end of the 1800s to make farming possible, extended from Lake Erie to Indiana. It was the last area of Ohio to be settled. Bowling Green is the largest city now in the remnants of this vast wetland.

Main Street is closed to traffic for the festival, and artists from around the country display and sell a variety of artwork. There are also musical performances, children's activities, and food. The festival has grown to include over 100 juried artists, 50 local/invitational artists, four live music stages, youth arts, acts of art, and concessions. Numerous types of music, including blues, jazz, and rock, are heard from the main stage. The Festival has a reputation for booking a diverse and entertaining musical line up. The Main Stage features national and international touring bands of all genres. The Black Swamp Arts Festival attracts 40,000 art and music fans to Bowling Green.

Bowling Green has hosted the National Tractor Pulling Championships since 1967. This annual event, one of the largest in the nation, is held at the Wood County Fairgrounds and draws an estimated 60,000 people. The Fairgrounds is located along Poe Road between Haskins Road (State Route 64) and Brim Road.

Country singers who have performed at the Wood County Fair:

Similar to other winter cities, Bowling Green hosts an annual event for three days in February to celebrate winter, snow, and cold weather activities. Winterfest in Bowling Green centers around the rich ice skating and ice hockey traditions of the town. Winterfest events are held all over Bowling Green, and on and off campus of Bowling Green State University. Notable events include curling, carriage rides, ice sculptures, and live entertainment, plus BGSU Athletic events such as hockey and basketball games and figure skating exhibition with local stars such as Scott Hamilton. 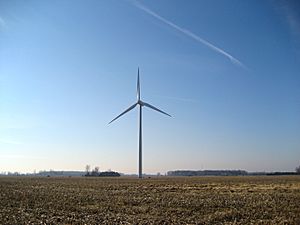 A wind turbine outside of Bowling Green, Ohio.

Ohio's first utility-sized wind farm is located along U.S. Route 6 just west of the city limits. There are four turbines that are each 257 feet (78 m) tall. These turbines generate up to 7.2 megawatts of power, which is enough to supply electricity for some 3,000 residents. Located about six miles (10 km) from the city, the turbines can be seen for miles and have become a local attraction. At the site of the turbines, a solar-powered kiosk provides information for visitors, including current information on wind speeds and the amount of energy being produced by the turbines.

Through the city's Municipal Utilities office, residents can request that their power come from green energy. As of March 1, 2014, the current power cost premium is $.007 per KWH.

However, Bowling Green's green credentials were damaged in 2008, when the city signed a power contract with AMP-Ohio to help build a 960-megawatt coal-fired power plant in Meigs County, Ohio. Several large environmental groups, including Sierra Club, the Natural Resources Defense Council, and the Ohio Environmental Council, opposed the building of a coal-fired power plant due to the pollution it would cause. In late 2009, AMP canceled the project, citing an estimated 37% increase in cost to more than $3 billion.

All content from Kiddle encyclopedia articles (including the article images and facts) can be freely used under Attribution-ShareAlike license, unless stated otherwise. Cite this article:
Bowling Green, Ohio Facts for Kids. Kiddle Encyclopedia.