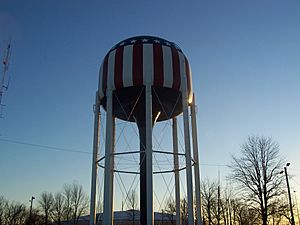 The B.G.M.U. Water Tower atop Reservoir Hill is a local landmark visible from many parts of Bowling Green. 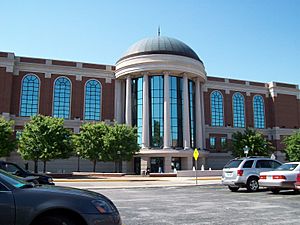 The Warren County Justice Center is the center of the local court system.

Founded by pioneers in 1798, Bowling Green was the provisional capital of Confederate Kentucky during the American Civil War. The city was the inspiration for the 1967 Everly Brothers song "Bowling Green". It is the home of numerous manufacturers, including General Motors and Fruit of the Loom. The Bowling Green Assembly Plant has been the source of all Chevrolet Corvettes built since 1981. Bowling Green is also home to the state's second-largest public university, Western Kentucky University. In 2014, Forbes magazine listed Bowling Green as one of the Top 25 Best Places to Retire in the United States.

The first Europeans known to have reached the area carved their names on beech trees near the river around 1775. By 1778, settlers established McFadden's Station on the north bank of the Barren River.

Present-day Bowling Green grew out of homesteads erected by Robert and George Moore and General Elijah Covington, the namesake of the town near Cincinnati. surrounding the original plot. The city of Bowling Green was officially incorporated by the Commonwealth of Kentucky on March 6, 1798.

Some controversy exists over the source of the town's name. The city itself follows the first county commissioners' meeting (1798), which named the town "Bolin Green" after the Bowling Green in New York City where patriots had pulled down a statue of King George III and used the lead to make bullets during the American Revolution. Some historians dispute this, however, and credit Bowling Green, Virginia, or a personal "ball alley game" of Robert Moore's instead. Early records indicate that the city name was also spelled "Bowlingreen".

By 1810, Bowling Green had 154 residents. Growth in steamboat commerce and the proximity of the Barren River increased Bowling Green's importance. Canal locks and dams on the Barren River made it much more navigable. In 1832, the first portage railway connected the river to the location of the current county courthouse. Mules pulled freight and passengers to and from the city on the tracks.

Despite rapid urbanization of the Bowling Green area in the 1830s, agriculture remained an important part of local life. A visitor to Bowling Green noted the boasting of a tavern proprietor named Benjamin Vance:

In 1859, the Louisville and Nashville Railroad (currently CSX Transportation) laid railroad through Bowling Green that connected the city with northern and southern markets.

Bowling Green declared itself neutral in an attempt to escape the Civil War. Because of its prime location and resources, however, both the Union and Confederacy sought control of the city. The majority of its residents rejected both the Confederacy and the Lincoln administration. On September 18, 1861, around 1300 Confederate soldiers arrived from Tennessee to occupy the city, placed under command of Kentucky native General Simon Bolivar Buckner. The city's pro-Union feelings surprised the Confederate occupiers. Surrounding hills were fortified to secure possible military approaches to the valuable river and railroad assets. In November 1861, the provisional Confederate government of Kentucky chose Bowling Green as its capital.

On February 14, 1862, after receiving reports that Fort Henry on the Tennessee River and Fort Donelson on the Cumberland River had both been captured by Union forces under Ulysses S. Grant, the Confederates realized they had to withdraw from Bowling Green. They destroyed bridges across the Barren River, the railroad depot, and other important buildings that could be used by the enemy. The city was subject to disruptions and raids throughout the remainder of the war. During the summer of 1864, Union General Stephen G. Burbridge arrested 22 civilians in and around Bowling Green on a charge of treason. This incident and other harsh treatment by federal authorities led to bitterness towards the Union among Bowling Green residents and increased sympathies with the Confederacy.

After the Civil War, Bowling Green's business district grew considerably. Previously, agriculture had dominated the city's economy. During the 1870s, many of the historic business structures seen today were erected. One of the most important businesses in Bowling Green of this era was Carie Burnam Taylor's dress-making company. By 1906, Taylor employed more than 200 women.

In 1868, the city constructed its first waterworks system. The fourth county courthouse was completed in 1868. The first three were completed in 1798, 1805, and 1813. In 1889, the first mule-drawn street cars appeared in the city. The first electric street cars began to replace them by 1895.

The Sisters of Charity of Nazareth founded St. Columbia's Academy in 1862, succeeded by St. Joseph's School in 1911. In 1884, the Southern Normal School, which had been founded in 1875, moved to Bowling Green from the town of Glasgow, Kentucky. Pleasant J. Potter founded a women's college in Bowling Green in 1889. It closed in 1909 and its property sold to the Western Kentucky State Normal School (see below, now known as Western Kentucky University). Other important schools in this era were Methodist Warren College, Ogden College (which also became a part of Western Kentucky University), and Green River Female College, a boarding school.

In 1906, Henry Hardin Cherry, the president and owner of Southern Normal School, donated the school to the state as the basis of the Western State Normal School. The school trained teachers for the expanding educational needs of the state. This institution is now known as Western Kentucky University and is the second-largest public university in the state, having recently grown larger than the University of Louisville.

In 1906, Doctors Lillian H. South, J. N. McCormack, and A.T. McCormack opened St. Joseph Hospital to provide around-the-clock medical and nursing care to the residents and students in the area.

In 1925, the Kentucky Street Rail Depot was opened. About 27 trains arrived daily at the depot. Local bus lines were also a popular form of travel. By the 1950s, both of these forms of transportation had dramatically declined as highway construction was subsidized by the federal government and the private car became the primary means of travel.

In 1940, a Union Underwear factory built in Bowling Green bolstered the city's economy significantly. During the 1960s, the city's population began to surpass that of Ashland, Paducah, and Newport.

Downtown streets became a bottleneck for traffic. In 1949, the U.S. Route 31W Bypass was opened to alleviate traffic problems, but it also drew off business from downtown. The bypass grew to become a business hotspot in Bowling Green. A 1954 advertisement exclaimed, "Your business can grow in the direction Bowling Green is growing – to the 31-W By-Pass".

By the 1960s, the face of shopping was changing completely from the downtown square to suburban shopping centers. Between May and November 1967, stores in Bowling Green Mall opened for business. Another advertisement said, "One-stop shopping. Just park [free], step out and shop. You'll find everything close at hand." Between September 1979 and September 1980, stores in the larger Greenwood Mall came on line. The city's limits began to stretch toward Interstate 65.

By the late 1960s, Interstate 65, which runs just to the east of Bowling Green, was completed. The Green River Parkway (now called the William H. Natcher Parkway), was completed in the 1970s to connect Bowling Green and Owensboro. These vital transportation arteries attracted many industries to Bowling Green.

In 1997, Bowling Green was designated a Tree City USA by the National Arbor Day Foundation. 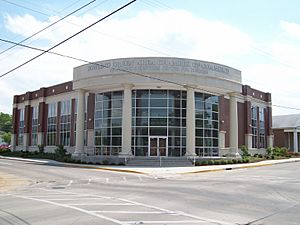 The new Bowling Green Area Chamber of Commerce building was one of the first parts of the Downtown Redevelopment Project to reach completion.

In 2012, the city undertook a feasibility study on ways to revitalize the downtown Bowling Green area. The Downtown Redevelopment Authority was formed to plan redevelopment. Plans for the project incorporated Bowling Green's waterfront assets and historic center and streetscape around Fountain Square. It also proposed a new building for the Bowling Green Area Chamber of Commerce, construction of a Riverwalk Park where downtown borders the Barren River, creation of a new public park called Circus Square, and installation of a new retail area, the Fountain Square Market.

As of spring 2009, the new Chamber of Commerce, Riverwalk Park, and Circus Square have been completed. The Southern Kentucky Performing Arts Center, a facility for arts and education, broke ground in October 2009 and celebrated its opening night on March 10, 2012, with a concert by Vince Gill. Ground was broken for the Fountain Square Market in 2012.

In 2005, an effort was made to incorporate a Whitewater Park into the downtown Bowling Green riverfront at Weldon Peete Park. Due to the recession, the project was not funded. In 2011, the project evolved into the Bowling Green Riverfront Foundation, expanding its efforts to develop land on the opposite side of Barren River from Mitch McConnell Park (which is located alongside the U.S. 31-W Bypass and the riverbank, between Louisville Road and Old Louisville Road), all the way upriver to Peete Park. The new plans include use of the adjacent river for white-water sports—the stretch of river includes rapids rated on the International Scale of River Difficulty between Class II and Class IV—as well as a mountain biking trail, a bicycle pump track, and a rock climbing area. Some of this facility will be located on a reclaimed landfill which had served as Bowling Green's garbage dump for many years. 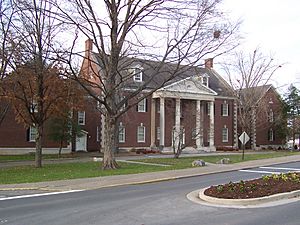 The Kentucky Museum is located on the campus of Western Kentucky University.

E.A. Diddle Arena, located on the campus of Western Kentucky University, is a multi-purpose arena with a seating capacity of 7,500 persons. Built in 1963 and renovated in 2004, the arena has hosted college sports such as basketball and volleyball. It also hosted the KHSAA Girls' Sweet Sixteen state championship event in high school basketball from 2001 to 2015, after which it moved to BB&T Arena at Northern Kentucky University. The arena has also played host to various traveling rodeos and circuses. In 2006, Diddle Arena hosted the first WWE event to be held in Bowling Green in over ten years. 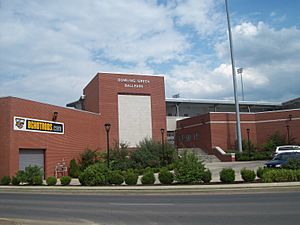 The Bowling Green Hornets of the Central Basketball League are based in Bowling Green, although they play their home games in Russellville. The Hornets are coached by Russellville native Nathan Thompson. 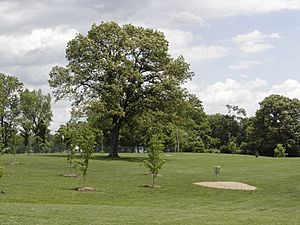 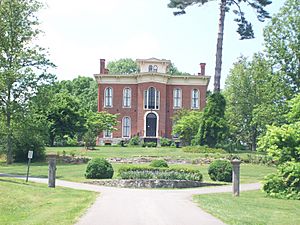 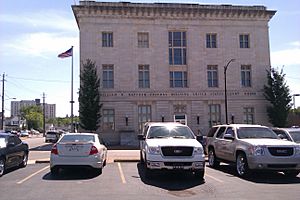 The Bowling Green Parks and Recreation Department administers 895 acres (3.62 km2) of public land for recreational use.

See Parks in Bowling Green, Kentucky for a formatted table of this data. 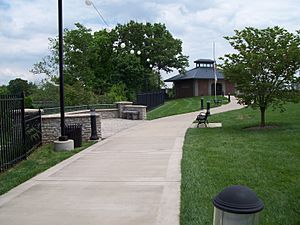 The city is served by Bowling Green–Warren County Regional Airport.

Nearby cities and communities

Many songs take their inspiration from Bowling Green, most famously 1967's "Bowling Green" by the Everly Brothers. This song was covered by Neko Case in 1997.

Bowling Green was the site of a railroad station that gave rise to a famous court case, Black and White Taxicab Co. v. Brown and Yellow Taxicab Co. Justice Oliver Wendell Holmes Jr. dissented and the case was mentioned and superseded by Erie Railroad Co. v. Tompkins, a case famous for its doctrine and pervasiveness in Civil Procedure classes in law schools in the U.S.

All content from Kiddle encyclopedia articles (including the article images and facts) can be freely used under Attribution-ShareAlike license, unless stated otherwise. Cite this article:
Bowling Green, Kentucky Facts for Kids. Kiddle Encyclopedia.