Kids Encyclopedia Facts
Not to be confused with the similarly-named cities of Russell in Greenup Co and Russell Springs in Russell Co.

Russellville is a home rule-class city in Logan County, Kentucky, in the United States. It is the seat of its county. The population was 6,960 at the time of the 2010 census. 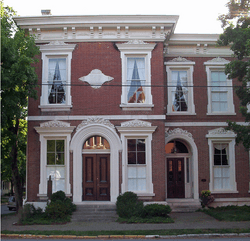 Now used as a residence, Russellville's Southern Deposit Bank was robbed by a gang of ex-Confederates in 1868.
See also: Confederate government of Kentucky

Local historian. Alex C. Finley claimed the area was first settled by Gasper Butcher, as a frontier settlement of the Transylvania Colony, of Virginia, now present-day Russellville, Kentucky, around 1780, but others have questioned this claim. Although the area is known to have been called Big Boiling Spring, Gasper Butcher's Spring, and Butcher's Station, W.R. Jillson was unable to find written records of any habitation before 1790, when William Cook and his wife erected Cook's Cabin, accompanied by eighteen-year-old William Stewart. Also known as Cook's Station, the community – located about 1 mile (1.6 km) east of the present city – became Logan Court House when it was chosen as the seat of newly formed Logan County in 1792.

Gen. William Russell was given a 2,000-acre (810 ha) grant for his military service during the American Revolution. He donated part of this property, in 1795, as a platted section for the county seat, known as Logan Court House. The town was renamed in Russell's honor in 1798. It was formally established by the state legislature on January 15, 1810. It was incorporated as a city on February 19, 1840.

In the early 19th century, the community had leaders who were politically prominent in the state. Four homes in the city still stand which at one time were the residences of future governors of Kentucky: John Breathitt, James Morehead, John J. Crittenden, and Charles S. Morehead.

During the Civil War, the Kentucky General Assembly declared its neutrality and declined to secede with the rest of the South. Even Kentucky was a slave state and Confederate sentiment was strong in the Blue Grass and the west, the residents of the mountainous eastern section were mainly small farmers and pro-Union. In the summer of 1862, when Confederate troops had occupied the area, 116 prominent pro-Confederates from 43 counties met as the Russellville Convention and created a rival Confederate government for Kentucky. George W. Johnson was elected as the state's Confederate governor. Despite de facto Union control over the rest of Kentucky, the government was recognized and Kentucky admitted to the Confederacy. Kentucky thus became the thirteenth star on the Confederate flag.

After the war, Kentucky struggled for some years with unrest. A gang made up of the former Confederate guerrillas Cole Younger, George Shepard, and Oliver Shepard, along with Confederate veterans John Jarrett and Arthur McCoy, robbed the Nimrod Long Bank or the Southern Deposit Bank in Russellville on March 20, 1868. Brothers Frank and Jesse James, who later had their own outlaw gang, may have taken part. A Russellville bank on the city square displays a large mural painted depicting the robbery. A reenactment (called a "play on horseback") is performed annually during the city's Tobacco and Heritage Festival.

Several downtown homes have been listed on the National Register of Historic Places.

According to the United States Census Bureau, the city has a total area of 10.6 square miles (27 km2), all land.

The climate in this area is characterized by hot, humid summers and generally mild to cool winters. According to the Köppen Climate Classification system, Russellville has a humid subtropical climate, abbreviated "Cfa" on climate maps.

Amid a largely agricultural area, Russellville is home to manufacturers of a number of products from pet food to plastics. The area's largest employer, Logan Aluminum, employs over 1,300 people.

Russellville has a lending library, a branch of the Logan County Public Library.

All content from Kiddle encyclopedia articles (including the article images and facts) can be freely used under Attribution-ShareAlike license, unless stated otherwise. Cite this article:
Russellville, Kentucky Facts for Kids. Kiddle Encyclopedia.