Kids Encyclopedia Facts
Not to be confused with Morganfield, Kentucky.

Morgantown is a home rule-class city in, and the seat of, Butler County, Kentucky, United States. The population was 2,394 at the time of the 2010 census.

The settlement may have originally been called Funkhouser Hill after Christopher Funkhouser, the local landowner who donated 60 acres (24 ha) of land to establish a seat for the newly formed Butler County in 1811. The etymology of the city's present name (originally written Morgan Town) is uncertain. It may have been chosen to honor a hunter named Morgan or to honor Daniel Morgan Smith, the first white child born in the town. It was incorporated as Morgantown by the state assembly in 1813, although the post office also went by the name Butler Court House during the 19th century.

Granville Allen, a member of the 17th Kentucky Infantry, was one of the first Union soldiers to die in the Civil War, in a skirmish on October 29, 1861. A monument was erected by the Granville Allen Post #93 GAR. This first skirmish between the North and South took place on the Daniel Boone Johnson property. The Johnson Cemetery is still there and is directly above the monument, which is a limestone marker cut into the side of the old Logansport road.

Morgantown has one of only two monuments in the country dedicated to soldiers of both sides who died in the Civil War. The Confederate-Union Veterans' Monument in Morgantown is located on the grounds of the county courthouse.

The city formerly had a sister city in Tatsuruhama, Japan, but that city is now part of Nanao. 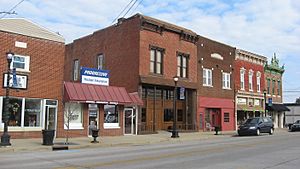 Buildings on the western side of the 100 block of N. Main Street in Morgantown

In 2010, Morgantown had the 16th-lowest median household income of all places in the United States with a population over 1,000. 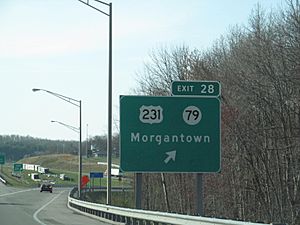 Prior to 1917, the city's primary channel of transportation was the Green River. However, in 1917, the river froze, leaving the city without supplies for two months. A subsequent period of road-building began, and in 1930, a road connecting Morgantown with Bowling Green provided an alternate conduit for commerce.

The city does not have railroad service.

The climate in this area is characterized by hot, humid summers and generally mild to cool winters. According to the Köppen Climate Classification system, Morgantown has a humid subtropical climate, abbreviated "Cfa" on climate maps.

Morgantown has a lending library, the Butler County Public Library.

All content from Kiddle encyclopedia articles (including the article images and facts) can be freely used under Attribution-ShareAlike license, unless stated otherwise. Cite this article:
Morgantown, Kentucky Facts for Kids. Kiddle Encyclopedia.