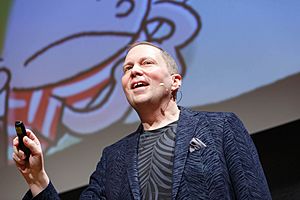 Pilkey was born in Cleveland, Ohio, to Barbara and David Pilkey Sr. He has one older sister. Pilkey was diagnosed with attention deficit hyperactivity disorder and dyslexia as a child. In elementary school in North Ridgeville, Ohio, Pilkey was frequently reprimanded for his behavior in class and thus usually sat at a desk in the school hallway, where he created the Captain Underpants character. Pilkey entered his first book, World War Won, in a national competition for student authors and won in his age category. The book's publication in 1987 was included in the award.

The atypical spelling of his first name came from a period of employment in a Pizza Hut.

Pilkey attended Kent State University. He was previously in a romantic relationship with Cynthia Rylant. He married Sayuri Pilkey in 2005.

Pilkey took a break from writing for a few years to care for his terminally ill father (who died on November 13, 2008), but in 2009 agreed with Scholastic to publish four new books. The first two are graphic novels: The Adventures of Ook and Gluk, Kung-Fu Cavemen From the Future, released on August 10, 2010; and Super Diaper Baby 2: Invasion of the Potty Snatchers, released on June 28, 2011. Captain Underpants and the Terrifying Re-turn of Tippy Tinkletrousers was released on August 28, 2012 and Captain Underpants and the Revolting Revenge of the Radioactive Robo-Boxers was released in January 2013.

As of 2017[update] Pilkey and his wife live in Bainbridge Island, Washington.

For the animated television series based on the books, see Dragon (TV series).

Pilkey authored the Dumb Bunnies books under the pseudonym Sue Denim. He has stated that the series was influenced by The Stupids.

Pilkey authored the Super Diaper Baby and Ook and Gluk books under the pseudonyms Harold Hutchins and George Beard.

All content from Kiddle encyclopedia articles (including the article images and facts) can be freely used under Attribution-ShareAlike license, unless stated otherwise. Cite this article:
Dav Pilkey Facts for Kids. Kiddle Encyclopedia.