Christine Ellen "Chrissie" Hynde (born September 7, 1951) is an American musician who is best known as a founding member of the rock band The Pretenders.

Inspired by hippie counter-culture, Hynde worked in London with Malcolm McLaren and Vivienne Westwood at their clothing store. In 1978, she formed her own band, The Pretenders, with Pete Farndon, James Honeyman-Scott and Martin Chambers. As singer, songwriter and guitarist, she has been the only constant member of the band throughout its history. She has also released a number of songs with other musicians including Frank Sinatra, Cher and UB40. Hynde and The Pretenders were inducted into the Rock and Roll Hall of Fame in 2005. 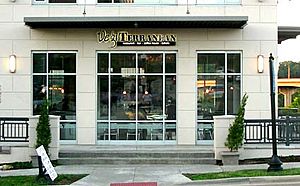 The VegiTerranean restaurant and bar and bakery at 21 Furnace St., Akron, Ohio

Hynde had a daughter, Natalie, in 1983 with Ray Davies of the Kinks. She then married Jim Kerr, lead singer of the band Simple Minds, and had another daughter, Yasmin, in 1985. They lived in South Queensferry. They later divorced, Hynde then married artist Lucho Brieva in 1997. They separated in 2002.

She follows Vaishnavism, a branch of Hinduism and travels to India once every year to further her studies.

Hynde lives in London, UK, and also has an apartment in the Northside Lofts in her hometown of Akron.

Hynde published an autobiography, ''Reckless: My Life as a Pretender'', on September 8, 2015. On December 13, 2015 she was interviewed by Emily Maitlis about the book on the BBC One Andrew Marr show.

JP, Chrissie and The Fairground Boys

All content from Kiddle encyclopedia articles (including the article images and facts) can be freely used under Attribution-ShareAlike license, unless stated otherwise. Cite this article:
Chrissie Hynde Facts for Kids. Kiddle Encyclopedia.