Cuyahoga Falls ( KY-ə-HOH-gə or KY-ə-HOG-ə) is a city in Summit County, Ohio, United States. As of the 2020 census, the city population was 51,114. It is the second-largest city in Summit County. The city was founded in 1812 by William Wetmore and was originally named Manchester, but renamed for the Cuyahoga River and the series of waterfalls that run along the southern boundary of the city.

Cuyahoga Falls was formed in 1812 near the junction of what was then Northampton, Stow, Tallmadge, and Portage townships. The focus was the series of Cuyahoga River waterfalls that provided power for manufacturing. 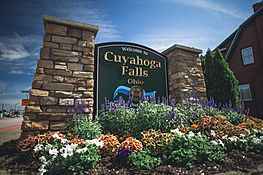 In 1812, Kelsey and Wilcox built a dam on the Cuyahoga River at a place where a railroad bridge crossed it in 1876. They then built a flour mill, an oil mill, and a saw mill. This led to the construction of a number of houses. This area was known as the old village. Development moved downstream, though, when the power was discovered to be better there. The old village was eventually destroyed in 1826, when a dam built by William Wetmore flooded the dam at the old village and its mills were torn down.

The earliest settler of Cuyahoga Falls included Joshua Stow and William Wetmore. In 1815, a saw mill was operating near Gaylord's Grove, using power generated by a dam on the Cuyahoga River there.

The town was initially called Manchester, but was renamed Cuyahoga Falls at the request of the Post Office since several other Manchesters were already in Ohio.

The village proper was first laid out in 1826 by Judge Richardson.

The town was incorporated in 1836, occupying 240 rods from Stow and Tallmadge townships. In 1853, seeing that the village and township of Cuyahoga Falls occupied the same territory, the village council disbanded and the community was only a township until 1868.

In March 1851, the township of Cuyahoga Falls was created out of the village limits. They covered the same territory, so the village council voted to adjourn sine die, letting the village be run under township jurisdiction until June 3, 1868, when the municipal government returned.

On July 3, 1940, the Doodlebug Disaster train wreck killed 43 people, the worst disaster in the history of the city.

Cuyahoga Falls had been founded as an industrial city, taking advantage of the river power. By the 1970s, though, it had become a residential community. This changed when Don Robart became mayor. He had been in favor of the merger with Northampton Township because of the additional land that could be used for development. Parts of that area have since been used for industrial development. Commercial development has also picked up, especially in the Howe Avenue area at the southern border of the city.

The city had one professional sports team, the Cuyahoga Falls Cougars, of the International Basketball League. They moved to Akron in 2006 and became the Akron Cougars.

The Cathedral of Tomorrow, founded by televangelist Rex Humbard in 1958, is in Cuyahoga Falls. It is now the church of pastor/evangelist Ernest Angley and was renamed Grace Cathedral. 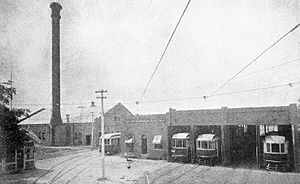 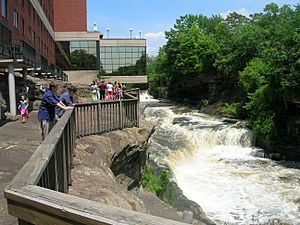 The Cuyahoga River descending behind the Sheraton Suites on Front Street.

The northwest portion of the city (the former Northampton Township) is served by the Woodridge Local School District, which also serves the portions of Akron that lie within the former Northampton Township boundaries, as well as most of Boston Township (including Peninsula). That district's high school, Woodridge High School, is also located in Cuyahoga Falls (albeit with a Peninsula mailing address); this makes Cuyahoga Falls one of the few communities in Ohio that is home to the sole high school for two separate school districts.

All content from Kiddle encyclopedia articles (including the article images and facts) can be freely used under Attribution-ShareAlike license, unless stated otherwise. Cite this article:
Cuyahoga Falls, Ohio Facts for Kids. Kiddle Encyclopedia.