The Homer Laughlin China Company is a ceramics manufacturer located in Newell, West Virginia, United States, established in 1871 and widely known for its retail dinnerware line, Fiesta. Since the late 1950s, the two brand had marketed its retail lines as well as separate lines for the food service industry. In 2010, the company acquired the nearby Hall China Company.

In March 2020, the food service divisions of the two brands, Homer Laughlin China Company and the Hall China Company, were acquired by Steelite International ("Steelite"), a British tableware manufacturer and supplier to the global hospitality industry. The retail division, including Fiestaware, along with the manufacturing operations and headquarters were not sold to Steelite and were subsequently renamed The Fiesta Tableware Company. 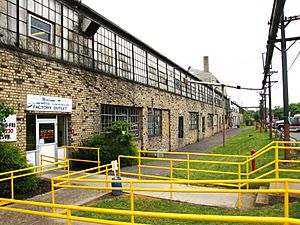 The visitor's entrance at the Homer Laughlin China Company.

The Homer Laughlin China Company began as Laughlin Pottery in East Liverpool, Ohio. The company was started in 1871 by brothers Shakespeare and Homer Laughlin; however, Shakespeare left the company in 1879. In 1889 William Edwin Wells joined Laughlin, and seven years later they incorporated the company. Laughlin sold his interest to Wells shortly thereafter. The firm experienced rapid growth and opened a facility in Newell, West Virginia, in 1903. By the late 1920s all production was centered at the West Virginia factory and the Ohio site was abandoned.

In 2010, Homer Laughlin purchased The Hall China Company in East Liverpool, and under the new HLC, Inc. name the two brands are the sole potteries in the area. As of 2015 the company continues to manufacture all of its products in the United States. A visitor center, museum, and factory outlet are maintained at its headquarters. 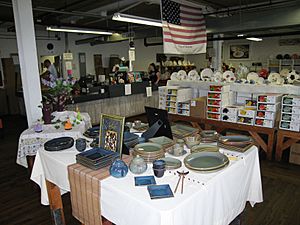 The retailing floor at the company's factory outlet store.

In the 1920s the firm advertised itself as the largest pottery company in the world. Estimates of production range from 25,000 to 35,000 different patterns since production started.

Homer Laughlin began producing the popular and colorful Fiesta line of dinnerware in 1936. Fiesta dinnerware continued to be produced through the late 1960s, with a number of new colors offered before the entire line was phased out in 1973. Fiesta was re-introduced by the company in 1986 and remains in production. The new Fiesta line contains a number of pieces produced from the original molds, as well as brand new pieces designed for modern day use. Like the original line, the current day production features an evolving number of colors.

In addition to Fiesta, two other lines of colorful dinnerware in bright, solid-colored glazes were introduced in the 1930s. Harlequin was introduced in 1938 as a less expensive alternative to Fiesta available at Woolworth's stores. They also produced Riviera dinnerware [1938], which is distinctive for its triple-scalloped edges. Riviera was available in red, yellow, light green, mauve blue, ivory [during the war] and occasionally cobalt blue. Production of Riviera ended circa 1948–49. Harlequin was produced until 1964 and was briefly reintroduced in 1979 for the Woolworth company's 100 year anniversary.

Epicure, a line based on popular colors and shapes of the 1950s was introduced in 1955, and was designed by a student of Russel Wright. Wright's own dinnerware lines were made by Homer Laughlin rival, Steubenville Pottery in nearby Steubenville, Ohio. Epicure today is a sought after collectible, but it was not well received when introduced and was dropped only 1 year after its debut.

Golden Wheat Line, Homer-Laughlin Company produced the Golden Wheat line between 1949 and 1966. These pieces were added to Duz Detergent boxes as an enticement to buyers. These dishes feature a center picture of wheat bending in the wind, with a trim on the edge in 22k gold.

Modern Star, a short dinnerware china set made by the Homer Laughlin China Company in association with the Taylor, Smith and Taylor Pottery Company and Quaker Oats Company. Modern Star is not a shape but a short dinnerware set with an “atomic style” starburst pattern prominent on each piece of the dinnerware. The dinnerware line was produced for the Quaker Oats Company as a way for the company to drive sales of its flagship breakfast product. Back then, companies like Quaker Oats would offer dinnerware and household items by marketing to their customers the ability to collect box tops from their products, which consumers could then send in to Quaker Oats with a reduced price per piece or set of the desired pieces of dinnerware the customer wanted to purchase. Customers could purchase small sets or a complete set of dinnerware for up to 6 people. Modern Star was one of the last dinnerware lines the Homer Laughlin China Company manufactured in partnership with Taylor, Smith & Taylor Pottery Company. The Modern Star Line was discontinued in 1958 and is highly collectible.

HLC maintains contracts with the federal government to supply china and dinnerware for a range of functions. This includes formal dinners to dinnerware for use by US troops at base camps and in the field. A number of these designs are exclusive to the US government.

All content from Kiddle encyclopedia articles (including the article images and facts) can be freely used under Attribution-ShareAlike license, unless stated otherwise. Cite this article:
Homer Laughlin China Company Facts for Kids. Kiddle Encyclopedia.