Rogers is a village in Middleton Township, Columbiana County, Ohio, United States. The population was 194 at the 2020 census. Rogers is located in the Salem, OH Micropolitan Statistical Area.

Rogers is located along the Youngstown and Southeastern Railroad. It is also home to the Rogers Flea Market & Auction, one of the largest open-air flea markets in Ohio. 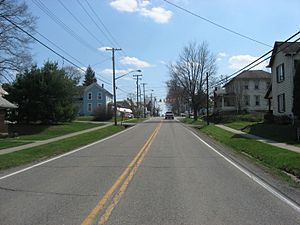 Rogers had its start in the year 1883 by the building of the PL&W railroad through that territory. It was named for its founder, T. G. Rogers. Rogers was incorporated as a village in 1895.

Mount Hope College was an academy in central Rogers, located on Highland Avenue. In 1894, the academy burned, but was rebuilt the same year. Asher A. Galbreath and Charles Burleigh Galbreath bought the academy in 1894. In 1905, the college was changed to a summer school, and later to a public school. The public school, Rogers Area School, served students in grades 1-8. The school was again destroyed by fire in January 1951. The successor schoolhouse, built on Sprucevale Road in southern Rogers, would become the Rogers Elementary School, serving under the Beaver Local School District until demolition in 2015.

According to the United States Census Bureau, the village has a total area of 0.23 square miles (0.60 km2), all land.

There were 85 households, of which 37.6% had children under the age of 18 living with them, 48.2% were married couples living together, 22.4% had a female householder with no husband present, 7.1% had a male householder with no wife present, and 22.4% were non-families. 16.5% of all households were made up of individuals, and 7.1% had someone living alone who was 65 years of age or older. The average household size was 2.79 and the average family size was 3.05.

Along with the nearby community of Signal, since 1955 Rogers has been home to Rogers Community Auction and Flea Market. One of the largest flea markets in Ohio, it is an open-air market held year-round, sitting on 250 acres (1,000,000 m2) of land. The market has an assortment of vendors including produce, clothing, novelties, and antiques. The market has more than 1,600 vendors' spaces, 350 of which are covered; no admission fee; and more than 70 acres (280,000 m2) of free parking. It is located off Ohio State Route 154, with access also available from Ohio State Route 7.

Weekly events include the weekly Friday flea market, with auctions of household items, antiques, farm fresh produce and livestock. Hays and grains are auctioned on Wednesdays, and the second Tuesday of each month is reserved for the equipment/consignment auction.

On July 25, 2014, the U.S. Immigration and Customs Enforcement raided more than one dozen vendors at the flea market for selling counterfeit consumer goods. The merchandise seized was worth over US$500,000. The sale of counterfeit goods violated the flea market's policies. The flea market resumed normal business on August 8.

Children in Rogers are served by the Beaver Local School District. The current schools serving Rogers are:

All content from Kiddle encyclopedia articles (including the article images and facts) can be freely used under Attribution-ShareAlike license, unless stated otherwise. Cite this article:
Rogers, Ohio Facts for Kids. Kiddle Encyclopedia.