East Palestine ( pal-Ə-steen) is a village in eastern Columbiana County, Ohio, United States. The population was 4,761 at the 2020 census. Located on the state's border with Pennsylvania, East Palestine is 20 miles (32 km) south of Youngstown and 50 miles (80 km) northwest of downtown Pittsburgh as part of the Salem, OH Micropolitan Statistical Area.

East Palestine is located along the Norfolk Southern Railway, and has a freight train station. From the 1870s until the mid 1960s, East Palestine was home to a large industry in ceramics and tire manufacturing. Since then, it has relied on its close proximity to industries in the metropolitan areas of Youngstown and Pittsburgh.

The town was founded in 1828 and incorporated as a city in 1875. Nearby clay pits supported a pottery industry; the W. S. George Pottery Company was formed in 1909 from the East Palestine Pottery Company and operated in the town until the 1950s. Formerly, East Palestine was called Mechanicsburg, but was changed to "East Palestine" as part of a religious nomenclature in that area such as New Galilee and Enon Valley, Pennsylvania. Mechanicsburg is today a name given to a village in Champaign County, near the opposite border of the state from East Palestine.

According to the United States Census Bureau, East Palestine has a total area of 3.15 square miles (8.16 km2), all land. 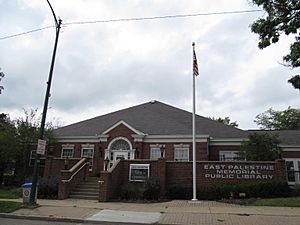 Children in East Palestine are served by the East Palestine City School District. The district formerly operated multiple schools throughout the city; however, a new middle school and a renovated elementary campus were erected surrounding the existing high school in 1997. The current schools in the district are:

The village is home to a public library, first opened in 1920.

All content from Kiddle encyclopedia articles (including the article images and facts) can be freely used under Attribution-ShareAlike license, unless stated otherwise. Cite this article:
East Palestine, Ohio Facts for Kids. Kiddle Encyclopedia.