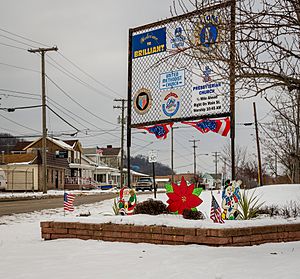 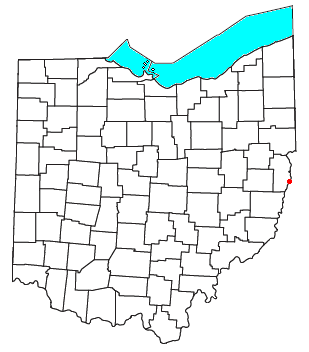 Brilliant is a census-designated place (CDP) and unincorporated community in eastern Wells Township, Jefferson County, Ohio, United States. It was named after the glass factory that once was located in the town. Previous names include Philipsburg and La Grange. Its zip code is 43913. It is located along State Route 7.

An Ohio River town, it is located below Mingo Junction and above Rayland. The community is part of the Weirton–Steubenville, WV-OH Metropolitan Statistical Area.

Brilliant was formerly incorporated as a village, but it disincorporated on November 24, 1993.

Brilliant was laid out in 1819 by Philip Doddridge under the name Philipsburg. The location was considered significant to commerce as it was the convergence of many roads in close proximity to the Ohio River. A new addition was laid out in 1836 named La Grange, a name also adopted by the railway station in 1856. In 1880, the Brilliant Glass Company was established and a glass factory was built at La Grange. The town later adopted the name of the glass company and was incorporated as Brilliant, changing the titles of the railway station and post office.

The climate in this area is characterized by relatively high temperatures and evenly distributed precipitation throughout the year. According to the Köppen Climate Classification system, Brilliant has a Humid subtropical climate, abbreviated "Cfa" on climate maps.

All content from Kiddle encyclopedia articles (including the article images and facts) can be freely used under Attribution-ShareAlike license, unless stated otherwise. Cite this article:
Brilliant, Ohio Facts for Kids. Kiddle Encyclopedia.