Wheeling is a city in Ohio County in the U.S. state of West Virginia. Located almost entirely in Ohio County, of which it is the county seat, it lies along the Ohio River in the foothills of the Appalachian Mountains. Wheeling was originally a settlement in the British colony of Virginia and later an important city in the Commonwealth of Virginia. Wheeling was the first state capital of West Virginia. Due to its location along major transportation routes, including the Ohio River, National Road, and the B&O Railroad, Wheeling became a manufacturing center in the late nineteenth century. After experiencing the closing of factories and substantial population loss following World War II, Wheeling's major industries now include healthcare, education, law and legal services, entertainment and tourism, and energy.

The area had been inhabited by Native Americans for thousands of years. In the 17th century, the Iroquois from present-day New York state conquered the upper Ohio Valley, pushing out other tribes and maintaining the area as their hunting ground.

Originally explored by the French, Wheeling still has a lead plate remnant buried by the explorer Céloron de Blainville in 1749 at the mouth of Wheeling Creek to mark their claim. Later, Christopher Gist and George Washington surveyed the land, in 1751 and 1770, respectively.

During the fall of 1769, Ebenezer Zane explored the Wheeling area and established claim to the land via "tomahawk rights." (This process meant to deaden a few trees near the head of a spring, and mark the bark with the initials of the name of the person who made the claim). He returned the following spring with his wife Elizabeth and his younger brothers, Jonathan and Silas; they established the first permanent European settlement in the Wheeling area, naming it Zanesburg. Other families joined the settlement, including the Shepherds (see Monument Place), the Wetzels, and the McCollochs (see McColloch's Leap).

In 1787, the United States gave Virginia this portion of lands west of the Appalachians, and some to Pennsylvania at its western edge, to settle their claims. By the Northwest Ordinance that year, it established the Northwest Territory to cover other lands north of the Ohio River and west to the Mississippi River. Settlers began to move into new areas along the Ohio.

By an act of the Virginia General Assembly on December 27, 1797, Wheeling was named the county seat of Ohio County.

Originally dubbed Fort Fincastle in 1774, the fort was later renamed Fort Henry in honor of Virginia's American governor, Patrick Henry. In 1777, Native Americans of the Shawnee, Wyandot and Mingo tribes joined to attack pioneer settlements along the upper Ohio River, which were illegal according to the Crown's Proclamation of 1763. They hoped an alliance with the British would drive the colonial settlers out of their territory. 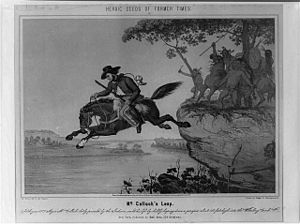 During the first attack of the year, Major Samuel McColloch led a small force of men from Fort Vanmetre along Short Creek to assist the besieged Fort Henry. Separated from his men, McColloch was chased by attacking Indians. Upon his horse, McColloch charged up Wheeling Hill and made what is known as McColloch's Leap 300 feet (91 m) down its eastern side.

In 1782, a native army along with British soldiers attempted to take Fort Henry. During this siege, Fort Henry's supply of ammunition was exhausted. The defenders decided to dispatch a man to secure more ammunition from the Zane homestead. Betty Zane volunteered for the dangerous task. During her departing run, she was heckled by both native and British soldiers. After reaching the Zane homestead, she gathered a tablecloth and filled it with gunpowder. During her return, she was fired upon but was uninjured. As a result of her heroism, Fort Henry remained in American control. 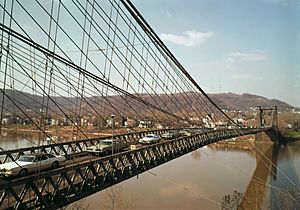 The National Road arrived in Wheeling in 1818, linking the Ohio River to the Potomac River, and allowing goods from the Ohio Valley to flow through Wheeling and on to points east. As the endpoint of National Road, Wheeling became a gateway to early western expansion. In 1849 the Wheeling Suspension Bridge crossed the Ohio River and allowed the city to expand onto Wheeling Island. Lessons learned constructing the bridge were used in the construction of the Brooklyn Bridge. Rail transportation reached Wheeling in 1853 when the Baltimore and Ohio Railroad connected Wheeling to Pennsylvania, Maryland and markets in the Northeast. A bridge over the river connected it to Bellaire, Ohio and western areas.

Much of this area had been settled by yeomen farmers, few of whom owned slaves. With the railroad, a larger industrial or mercantile middle-class developed that depended on free labor; it either felt disinterest or hostility to slavery. The Wheeling Intelligencer newspaper expressed the area's anti-secession sentiment as tensions rose over slavery and national issues. The city became part of the movement of western areas to secede from Virginia after the beginning of the Civil War. It was the location of the aforementioned Wheeling Convention. It served as the provisional capital of the Restored Government of Virginia from 1861 to 1863, and became the first capital of West Virginia after it seceded from Virginia and was admitted to the Union in its own right in 1863.

The growing German population, which included immigrants after the 1848 Revolutions, was firmly anti-slavery. The Germans of Wheeling organized the "First West Virginia Artillery" to oppose the Confederacy and played a role in the initial movement to separate from Virginia. The Germans' culture influenced the city, such as their "German Singing Societies," the first of which began in 1855.

Although Wheeling lost its position as capital in 1865, it continued to grow. In the late nineteenth century, it served as a prime industrial center for the state. Noted businesses of the era included the Bloch Brothers Tobacco Company and steel concerns. As it grew, prosperous residents built an area of fine housing around Wheeling Island, but slums also grew. As a result of the growth, an ordinance was passed regulating personal cesspools, including a ban on pipe communications with other homes and businesses unless offensive smells were properly trapped.

With industry, Wheeling reached its peak of population in 1930. The Great Depression, and later changes and restructuring in heavy industry following World War II, led to a loss of working-class jobs and population. Capitalizing on its rich architectural heritage, Wheeling has worked to revive its main street and heritage tourism activities near the Ohio River. In addition, West Virginia has constructed fiber optics networks for advanced communication. Wheeling is becoming a center in health services and education as well.

Wheeling is located in northern West Virginia, on what is known as the northern panhandle. The area lies within the ecoregion of the Western Allegheny Plateau. The city is directly across the river from the state of Ohio and only 11 miles (18 km) west of Pennsylvania. It is a part of the Tri-State area of Ohio, Pennsylvania and West Virginia, which is commonly referred to as the Ohio River Valley Region or "The Ohio Valley".

Wheeling Creek flows through the city, and meets the Ohio River in downtown Wheeling.

The city is located both on the West Virginia side of the Ohio River, and on an island in the middle of the river called Wheeling Island.

Wheeling lies on the transitional climate zone between the humid subtropical climate and the humid continental climate (Köppen: Cfa/Dfa, respectively) with hot humid summers and cold winters. The annual precipitation is about 37 inches.

There were 12,816 households of which 22.6% had children under the age of 18 living with them, 37.6% were married couples living together, 12.7% had a female householder with no husband present, 4.0% had a male householder with no wife present, and 45.8% were non-families. 40.4% of all households were made up of individuals and 17.5% had someone living alone who was 65 years of age or older. The average household size was 2.11 and the average family size was 2.84. 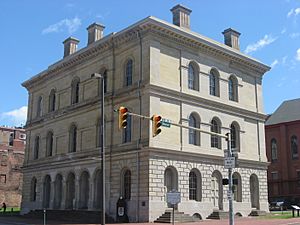 The city of Wheeling has a rich and varied history. West Virginia Independence Hall was the site of the Wheeling Convention, two meetings held in 1861 that ultimately reversed Virginia's Ordinance of Secession. Twenty-six counties in Virginia's north and west voted against secession from the Union and created the new state of West Virginia, which the United States quickly admitted. Later in 1861 and continuing to 1863, the building was the site of many heated debates during the First Constitutional Convention of West Virginia including the name of the new state. The oldest building in the area is Shepherd Hall (Monument Place), built in 1798.

Wheeling is home to Centre Market, formerly Wheeling's market house. Built in 1853, the market house and the surrounding area have been adapted for use as retail shops and restaurants.

The first official memorial monument in the state of West Virginia, dedicated specifically to men killed in the Vietnam War, was dedicated in Wheeling, with full military honors, in a Memorial Day 1986 ceremony. The monument was erected in front of the flagpole near the main shelter of Bethlehem Community Park in the village of Bethlehem, just southeast of Wheeling. The roughly 6 foot tall granite memorial consists of a large, bronze dedication plaque with the names of KIAs from the Wheeling/Ohio County region. Below the dedication plaque is a bronze map of South Vietnam, complete with names of 28 major cities.

In October 2007 the City of Wheeling opened the state's first concrete skateboard park. The 12,000-square-foot (1,100 m2) facility was designed and built by world-renowned skatepark builder, Grindline, of Seattle, Washington. The park consists of 60% bowls and 40% street elements; it is located within the Chambers Ballfield Complex in the Elm Grove section of the City. An addition to the street section of the park was completed by Grindline in November 2009. A covered shelter, restrooms, and webcam are scheduled to be installed in early 2010. The park is lighted and open 24/7.

All content from Kiddle encyclopedia articles (including the article images and facts) can be freely used under Attribution-ShareAlike license, unless stated otherwise. Cite this article:
Wheeling, West Virginia Facts for Kids. Kiddle Encyclopedia.