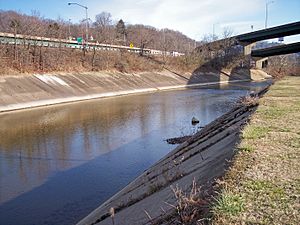 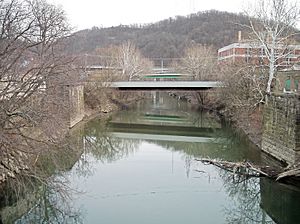 Wheeling Creek is a tributary of the Ohio River, 25 miles (40 km) long, in the Northern Panhandle of West Virginia in the United States, with a watershed extending into southwestern Pennsylvania. Via the Ohio River, it is part of the watershed of the Mississippi River, draining an area of approximately 300 square miles (780 km2) on the unglaciated portion of the Allegheny Plateau. It flows into the Ohio River in downtown Wheeling, just downstream of Ohio's Wheeling Creek on the opposite bank. A variant name is Big Wheeling Creek.

Wheeling Creek is formed in northeastern Marshall County, West Virginia, by the confluence of streams known as the Enlow Fork and the Dunkard Fork:

The National Road (U.S. Route 40) parallels Little Wheeling Creek through eastern Ohio County, and follows Wheeling Creek for part of its route through the city of Wheeling; the creek is also paralleled for five miles (8 km) in Wheeling by a rail trail as part of the Wheeling Heritage Trail network.

Wheeling Creek is a popular fishing destination to those close to it. There are many entry points located alongside the Wheeling Heritage Trail System. There are a variety of fish species including muskellunge, smallmouth bass, sunfish, hognose suckers, various species of catfish, and bluegill. Wheeling Creek is also regularly stocked with rainbow trout and brown trout.

All content from Kiddle encyclopedia articles (including the article images and facts) can be freely used under Attribution-ShareAlike license, unless stated otherwise. Cite this article:
Wheeling Creek (West Virginia) Facts for Kids. Kiddle Encyclopedia.