Stratton is a village in northern Jefferson County, Ohio, United States, along the Ohio River. The population was 294 at the 2010 census. It is part of the Weirton-Steubenville, WV-OH Metropolitan Statistical Area.

Stratton gained international attention in 2002 when it lost before the United States Supreme Court in the matter of Watchtower Society v. Village of Stratton, a case in which a town ordinance's provisions making it a misdemeanor to engage in door-to-door advocacy without first registering with town officials and receiving a permit violates the First Amendment as it applies to religious proselytizing, anonymous political speech and the distribution of handbills. 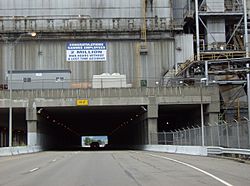 The W.H. Sammis Power Plant, located in Stratton, is built over State Route 7.

Stratton is part of the Weirton–Steubenville, WV-OH Metropolitan Statistical Area.

There were 145 households, of which 24.1% had children under the age of 18 living with them, 36.6% were married couples living together, 10.3% had a female householder with no husband present, 5.5% had a male householder with no wife present, and 47.6% were non-families. 45.5% of all households were made up of individuals, and 19.3% had someone living alone who was 65 years of age or older. The average household size was 2.03 and the average family size was 2.87.

Public education in the village of Stratton is provided by the Edison Local School District. Campuses serving the village include Stanton Elementary School (Preschool-Grade 8) and Edison High School [1] (Grades 9-12).

All content from Kiddle encyclopedia articles (including the article images and facts) can be freely used under Attribution-ShareAlike license, unless stated otherwise. Cite this article:
Stratton, Ohio Facts for Kids. Kiddle Encyclopedia.