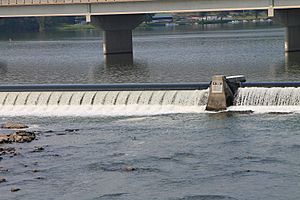 The Adam T. Bower Memorial Dam (formerly known as the Sunbury Fabridam) is the world's longest inflatable dam. The dam is located just below the confluence of the Western and Main Branches of the Susquehanna River, in Upper Augusta Township, between the town of Shamokin Dam and the city of Sunbury, Pennsylvania.

There are plans underway to add a fish ladder to the dam. The fish ladder is primarily to allow the American shad to access the upper part of the Susquehanna. For the 2007 season the dam was slated to be deflated slowly over the period from August 20 through August 23. This earlier than usual lowering of the dam was to facilitate the replacement and repair of at least 3 of the synthetic bags which comprise the dam.

On this site there was the earlier Shamokin Dam. This dam maintained an adequate water level for ferry traffic across the Susquehanna from Shamokin (now Sunbury) to the west bank. It was destroyed in March, 1904 by the breakup of 22 inches (56 cm) of ice in the spring thaw. This is the dam for which the west bank town of Shamokin Dam was named.

There is another, existing, low head dam 1.2 miles (1.9 km) down stream, for the Shamokin Dam Power Plant.

All content from Kiddle encyclopedia articles (including the article images and facts) can be freely used under Attribution-ShareAlike license, unless stated otherwise. Cite this article:
Adam T. Bower Memorial Dam Facts for Kids. Kiddle Encyclopedia.