Lemont is an unincorporated community and census-designated place (CDP) in Centre County, Pennsylvania, United States, and is the location of the only remaining granary in Pennsylvania. It is part of the State College, Pennsylvania Metropolitan Statistical Area. The population was 2,270 at the 2010 census.

The community is in the valley of Spring Creek, a north-flowing tributary of Bald Eagle Creek and part of the Susquehanna River watershed. The southwest end of Mount Nittany rises above the eastern edge of the town.

According to the United States Census Bureau, the Lemont CDP has a total area of 1.27 square miles (3.28 km2), all of it land.

There were 924 households, out of which 30.0% had children under the age of 18 living with them, 53.8% were married couples living together, 3.5% had a male householder with no wife present, 7.0% had a female householder with no husband present, and 35.7% were non-families. 25.2% of all households were made up of individuals, and 6.1% had someone living alone who was 65 years of age or older. The average household size was 2.45 and the average family size was 3.00. 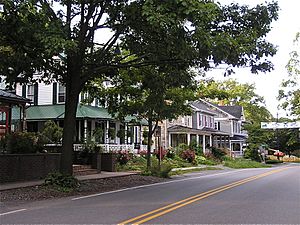 The Lemont Historic District is home to many historic homes and businesses. The John Thompson Coal Sheds and Granary is the last remaining wooden grain elevator in Pennsylvania and is being restored by the Lemont Village Association. Lemont Elementary School, built from 1938 to 1939 as College Township School, is an architectural gem of massive limestone that overlooks the village. The State College Area School District is considering closing the school; however, many district residents are opposed. The Friends of Lemont School was organized to spearhead an effort to combat the closure and sponsored an on-line petition to keep the neighborhood school.

All content from Kiddle encyclopedia articles (including the article images and facts) can be freely used under Attribution-ShareAlike license, unless stated otherwise. Cite this article:
Lemont, Pennsylvania Facts for Kids. Kiddle Encyclopedia.