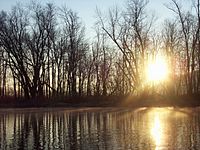 Penns Creek is a 67.1-mile-long (108.0 km) tributary of the Susquehanna River in central Pennsylvania in the United States.

The creek was called the Kaarondinhah by the Iroquois who were in possession of the Susquehanna Valley from the mid-17th to the mid-18th centuries. Between 1754, when the Iroquois sold most of the Susquehanna Valley including the creek to the provincial government of Pennsylvania, and 1772, it was called both Big Mahany and John Penn's Creek (after the younger brother of Pennsylvania founder William Penn) by the European settlers who moved there.

Penns Creek drains a watershed of approximately 163 square miles (420 km2) in Snyder, Union, and Centre counties. It flows from its headwaters north of Spring Mills to the Susquehanna River, approximately 3.6 miles (5.8 km) downstream of Selinsgrove.

A large spring within Penn's Cave, a commercial cave that offers guided tours by boat, forms one source for this limestone creek.

The upper reaches of Penns Creek offer some of the best trout flyfishing in the Northeast, with a Green Drake hatch occurring in late May that is one of the largest in the world. Additional Hendricksons, Sulphurs, and Tricos also attract anglers. As the water travels towards the Susquehanna, the temperatures gradually warm to levels best suited for panfish.

Ongoing pollution and soil erosion in the region continue to degrade the water quality and the environment locally as well as regionally. Farming, surface mining, wastewater treatment facilities and industrial spills are cited as contributing factors to loss of water quality. It also contributes to the pollution of the Chesapeake Bay. Controlling the wastewater discharges alone is expected to cost local taxpayers billions of dollars.

All content from Kiddle encyclopedia articles (including the article images and facts) can be freely used under Attribution-ShareAlike license, unless stated otherwise. Cite this article:
Penns Creek Facts for Kids. Kiddle Encyclopedia.