Snyder County is a county in the U.S. state of Pennsylvania. As of the 2010 census, the population was 39,702. The county seat is Middleburg. Snyder County was formed in 1855 from parts of Union County.

Snyder County was settled in the 1740s by Pennsylvania Germans from Berks and Lancaster counties, and became an independent political unit on March 2, 1855, when formed under part of Union County. Snyder County took its name in honor of the famous citizen and political figure Simon Snyder, who was governor of Pennsylvania for three terms, from 1808 to 1817, and made his home in Selinsgrove. The county seat of Middleburg was laid out in 1800 and incorporated in 1864.

According to the U.S. Census Bureau, the county has a total area of 332 square miles (860 km2), of which 329 square miles (850 km2) is land and 2.8 square miles (7.3 km2) (0.8%) is water. It is the fifth-smallest county in Pennsylvania by area. Snyder County is in the Ridge and Valley region of the Appalachian Mountains. Two parallel mountain ridges, Shade Mountain and Jacks Mountain, run southwest to northeast. The Susquehanna River is the eastern border. Between the ridges are steep hills, gently rolling hills, and flat creek valleys. With over 400 active farms in the county, agriculture plays an important role in the economy and environment. Roughly half the county remains forested with both softwoods and hardwoods. These woods provide a place for wildlife to roam which provides for the sport of hunting. 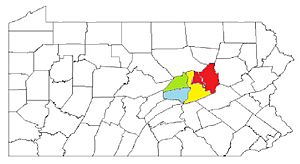 Electric – All 21 municipalities within Snyder County receive electric service from PPL Electric Utilities, Inc. According to the U.S. Department of Energy, a 500 kilovolt line runs through Snyder County. Three 138 kilovolt lines stem from this 500 kilovolt line at the Sunbury Generation coal-fired power plant in Shamokin Dam, which is capable of producing roughly 400 megawatts of electrical power.

Snyder County has two main arteries. U.S. Routes 11/15 travel through the county on the east end generally following the path of the Susquehanna River. The highway is a major travel artery through the region. Flow is constant (truck and vehicle) with very heavy loads and backups on Fridays (especially in the afternoon) and holiday weekends. There is a proposed major highway bypass project called the Central Susquehanna Valley Thruway. It is meeting with funding challenges that have delayed the project for decades. The proposed thruway would cross Monroe Township just north of Shamokin Dam. Many residential properties are designated for eminent domain actions. Residents along the proposed route have expressed concerns about the negative impact on their quality of life that the thruway would mean. Others are concerned that the bypass will mean the loss of local revenue and jobs that the traffic brings to the many local restaurants and hotels that are located along the current U.S. 11/15 highway. In June 2007 another two-year delay was announced by the Pennsylvania Department of Transportation.

U.S. Route 522 begins in Selinsgrove and travels west through Kreamer, Middleburg and on to Lewistown. Route 35 begins on U.S. 11/15 south of Selinsgrove and runs roughly parallel to Route 522 crossing through Freeburg and Mount Pleasant Mills then westward to McAllisterville and Richfield in western Snyder County.

Snyder County is in Pennsylvania Department Of Transportation District 3. According to PennDOT there are 240 state-owned bridges in the county. Currently, many existing bridges and roads in the county are in need of repair. In 2007, 27 of the bridges were rated structurally deficient and 4 were posted with weight limits. The bridge that spans Middle Creek in Kreamer has been deemed structurally deficient by the state. 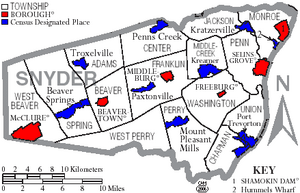 Under Pennsylvania law, there are four types of incorporated municipalities: cities, boroughs, townships, and, in at most two cases, towns. The following boroughs and townships are located in Snyder County:

The population ranking of the following table is based on the 2010 census of Snyder County.

Snyder County is well known for its unmistakable Pennsylvania German language and culture, agricultural heritage, as well as its fraktur, Kentucky rifles, wood products industries, Middleswarth chip factory, and the annual fairs, festivals, and auctions that keep the local heritage alive. Some of the more famous historical structures of the county are the Governor Snyder Mansion, Pomfret's Castle, Schoch Block House, ruins of the Pennsylvania Canal, and its covered bridges. Snyder County is home to Snyder-Middleswarth State Park, the Tall Timbers Natural Area, and thirteen Pennsylvania state historical markers.

All content from Kiddle encyclopedia articles (including the article images and facts) can be freely used under Attribution-ShareAlike license, unless stated otherwise. Cite this article:
Snyder County, Pennsylvania Facts for Kids. Kiddle Encyclopedia.