Beavertown is a borough in Snyder County, located in Central Pennsylvania's Susquehanna River Valley in the United States. The population was 965 at the 2010 census.

Beavertown is surrounded by Beaver Township.

There were 364 households, out of which 30.5% had children under the age of 18 living with them, 59.9% were married couples living together, 7.4% had a female householder with no husband present, and 29.4% were non-families. 26.6% of all households were made up of individuals, and 15.4% had someone living alone who was 65 years of age or older. The average household size was 2.39 and the average family size was 2.88.

Beavertown Community Library is a public library that is part of the Snyder County Library system. It is located 111 W. Walnut Street, Beavertown. (570)-658-3437 Patrons have free use of the PA Power Library and Access Pennsylvania which provide extensive online resources for children and adults. There are also branches of the library system in the Community Building in Middleburg and on Library Lane in McClure.

The State Library of Pennsylvania Commonwealth & Walnut Sts., Harrisburg, PA. This library provides information for State Government and citizens, collects and preserves Pennsylvania's written heritage through materials published for, by, and about Pennsylvania.

Beavertown was the seasonal home of Davy Jones, a member of The Monkees.

Beavertown was originally called Swifttown. It was named after John Swift who settled there having received a grant for the land in 1760. He sold the land to Jacob Lechner. He named the town after Swift. Captain Fredrick Evans surveyed the land into lots in 1810. When the first post office was opened in 1830, it was renamed Beavertown after the local mammals. 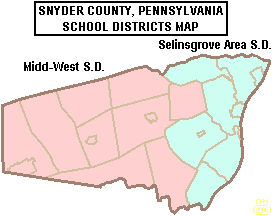 View of the eastern end of Beavertown

Beavertown residents may also apply to attend any of the Commonwealth's 14 public cyber charter schools (in 2013) at no additional cost to the parents. This includes SusQ Cyber Charter School which is locally operated. The resident’s public school district is required to pay the charter school and cyber charter school tuition for residents who attend these public schools. The tuition rate that Midd-West School District must pay was $9,626.31 in 2012. By Commonwealth law, if the District provides transportation for its own students, then the District must provide transportation to any school that lies within 10 miles of its borders. Residents may also seek admission for their school aged child to any other public school district. When accepted for admission, the student's parents are responsible for paying an annual tuition fee set by the Pennsylvania Department of Education.

Central Susquehanna Intermediate Unit #16 provides a wide variety of services to children living in its region which includes Beavertown. Early screening, special education services, speech and hearing therapy, autistic support, preschool classes and many other services like driver education are available. Services for children during the preschool years are provided without cost to their families when the child is determined to meet eligibility requirements. Intermediate units receive taxpayer funding: through subsidies paid by member school districts; through direct charges to users for some services; through the successful application for state and federal competitive grants and through private grants.

Bloomsburg University of Pennsylvania is a public university located in Bloomsburg. It is one of the 14 state universities that make up the Pennsylvania State System of Higher Education (PASSHE). Eleventh and twelfth grade students in Beavertown may attend the University at a significant tuition discount through its Dual Enrollment program earning college credits while still earning their high school diploma. Additionally, Bloomsburg University operates a summer college program called ACE [1], where high school aged students can earn credits at a 75% tuition discount. The credits are transferable to many other Pennsylvania universities through the state’s TRAC system. [2]

All content from Kiddle encyclopedia articles (including the article images and facts) can be freely used under Attribution-ShareAlike license, unless stated otherwise. Cite this article:
Beavertown, Snyder County, Pennsylvania Facts for Kids. Kiddle Encyclopedia.