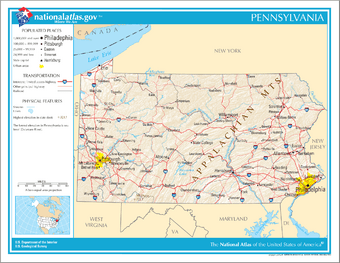 Compare this map with its major roads of today and its terrains with the above canal system map.

The Susquehanna Canal of the Pennsylvania Canal System was funded and authorized as part of the 1826 Main Line of Public Works enabling act, and would later become the Susquehanna Division of the Pennsylvania Canal under the Pennsylvania Canal Commission. Constructed early on in America's brief canal age, it formed an integral segment of the water focused transportation system which cut Philadelphia-Pittsburgh (pre-railroad) travel time from nearly a month to just four days. One of the system's navigations, the Susquehanna Canal/division created a mule-towed navigable channel 41 miles (66 km) along the west bank of the main stem of the Susquehanna River between a lock terminus near the mouth of the Juniata Tributary River and the canal basin at Northumberland. Meeting the West Branch Canal and the North Branch Canal at Northumberland, it formed a link between the public and private canals upriver and the main east–west Pennsylvania Canal route known as the Main Line of Public Works which was devised to connect Philadelphia to Pittsburgh, southern New York, northern Pennsylvania and Lake Erie using most of the far reaches of the Susquehanna's tributaries.

The engineering needs of the Susquehanna Canal, were modest in comparison to many contemporary projects, and construction was timed after other more difficult projects in the system were well under way. The Susquehanna Division Canal employed 12 locks overcoming a total of just 86 feet (26 m) in its 41 miles (66 km)s length It was begun in 1827 and was finished in 1831 in time to connect to traffic between the Union Canal and the Allegheny Portage Railroad, which lifted wheeled canal barges up one of the gaps of the Allegheny and over the Allegheny Plateau into the Allegheny-Ohio valleys.

All content from Kiddle encyclopedia articles (including the article images and facts) can be freely used under Attribution-ShareAlike license, unless stated otherwise. Cite this article:
Pennsylvania Canal (Susquehanna Division) Facts for Kids. Kiddle Encyclopedia.