The West Branch Division of the Pennsylvania Canal ran 73 miles (117 km) from the canal basin at Northumberland, Pennsylvania, at the confluence of the West Branch Susquehanna River with the main stem of the Susquehanna River, north through Muncy, then west through Williamsport, Jersey Shore, and Lock Haven to its terminus in Farrandsville. At its southern terminus in the Northumberland basin, the West Branch Canal met the North Branch Canal and the Susquehanna Division Canal. Through these connections to other divisions of the Pennsylvania Canal, it formed part of a multi-state water transportation system including the Main Line of Public Works.

Between Northumberland and Muncy, the canal lay east of the river. Beyond Muncy, where the river makes a right-angle turn, the canal lay to the north. Started in 1828 and completed in 1835, it had 19 lift locks overcoming a total vertical rise of about 140 feet (43 m). The locks, beginning with No. 13, slightly upstream of the Northumberland Canal Basin, and ending with No. 34 at Lockport, across the river from Lock Haven, included two guard locks and an outlet lock in addition to the 19 lift locks.

Additions to the West Branch Canal included the Bald Eagle Crosscut Canal, which ran 4 miles (6.4 km) through Lock Haven and Flemington along Bald Eagle Creek. It linked the West Branch Canal to a privately financed addition, the Bald Eagle and Spring Creek Navigation, that extended the canal system another 22 miles (35 km) to Bellefonte along Bald Eagle and Spring creeks. Beginning in 1837, large quantities of pig iron and bituminous coal traveled to distant markets via these canals.

The Lock Haven Dam (also known as the Dunnstown Dam), was built in the 19th century primarily to provide water to the West Branch Canal. Canal boats crossed the pool behind the dam using a cable ferry between Lock No. 35 on the Lock Haven (Bald Eagle Crosscut Canal) side of the river and Lock No. 34 on the Lockport (West Branch Canal) side, about 2,000 feet (610 m) downriver from the Jay Street Bridge. 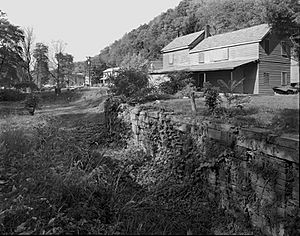 Lock No. 34 and lock keeper's house at Lockport 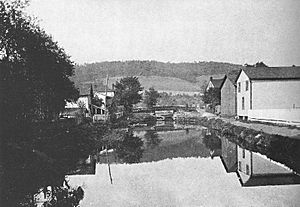 Bald Eagle Crosscut Canal in Lock Haven, 1898 or earlier. View is to the north from Main Street. 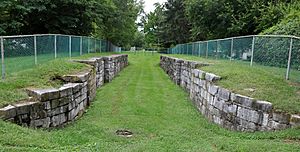 Lock No. 32 in Jersey Shore in 2012. The lock remnants are in a public space bounded by Cemetery, Locust, and South Broad streets and Cherry Alley.

Remnants of the canal exist along the West Branch Susquehanna River between Northumberland and Lock Haven. Canal walls made of stone still stand near Muncy, while other canal and lock remnants are preserved near Lock Haven. Archaeological work and restoration began in 2005 at the Muncy Canal Heritage Park and Nature Trail, 11 acres (4.5 ha) including remains of a towpath, a lock, a canal wall, and a lock tender's house. Part of the Bald Eagle Crosscut Canal still flows along Bald Eagle Creek through Flemington. Lock No. 32 has been preserved in Jersey Shore.

All content from Kiddle encyclopedia articles (including the article images and facts) can be freely used under Attribution-ShareAlike license, unless stated otherwise. Cite this article:
Pennsylvania Canal (West Branch Division) Facts for Kids. Kiddle Encyclopedia.