Lewisburg is a borough in Union County, Pennsylvania, United States, 30 miles (48 km) south by southeast of Williamsport and 60 miles (97 km) north of Harrisburg. In the past, it was the commercial center for a fertile grain and general farming region. The population was 5,620 at the 2000 census. It is the county seat of Union County. Located in central Pennsylvania, on the West Branch Susquehanna River, Lewisburg is northwest of Sunbury. It is home to Bucknell University and is near the Lewisburg Federal Penitentiary. Its 19th-century downtown is on the National Register of Historic Places. Lewisburg is the principal city of the Lewisburg, PA Micropolitan Statistical Area, and is also part of the larger Bloomsburg-Berwick-Sunbury, PA Combined Statistical Area.

Lewisburg was founded in 1785 by Ludwig Derr. A settler of the area (since as early as 1763–1769), Derr had purchased several tracts of land from the William Penn family and other neighboring land owners, the largest of which was known as "The Prescott". Having been on the land for such a long time, Derr had befriended the local Native Americans of the area. His relationship with these indigenous peoples was so well founded that, even as many of the other local settlers' homesteads we routinely were sacked by Native Americans, Derr's lands remained free from attacks. Subsequently, in 1784, he worked with Samuel Weiser to lay out his combined land tracts, and create Derrstown. The name was later changed to Lewisburgh when Union County was separated from Snyder County.

Much has been considered regarding 'how' the name changed from Derrstown to Lewisburg. The most likely truth is that Derr's first name "Ludwig" translated into English as "Louis" but, being of German descent, it was spelled "Lewis". Later, after Derr's death, the traditional Germanic "burgh" was appended to his first name to create Lewisburgh.

Note: U.S. Postal Service records contradict this story. The post office was named Lewisburgh when it was established in 1796; in 1893, the name was shortened to Lewisburg.

The street names that run east and west are a local urban mystery. St. George, St. Catherine, and St. Louis etc. appear to be named for saints. However, since Derr was a Lutheran, and did not pay homage to Catholic saints, this is unlikely. Rather, the street names are more likely named for Derr's family members, as those streets are consecutively parallel, and emanate from what was then Derr's home, and the location of the first available lot sold (which were both situated on, what is now, Mill Street). George was Ludwig's son, his wife Catherine and Ludwig/Lewis (sic) himself. The other original street names that still exist are St. John, St. Mary and St. Anthony, which are probably the names of other children from families with whom Derr's own family were friends. However, there is an indication that Derr also had a daughter named Mary. Overall, however, the premise is further supported by the notion that the German word for street is Strasse (Straße, abbreviated St). At the time, street names were pronounced as Strasse Mary or Strasse George. Later, when signs were made to note the street names, the abbreviation for Strasse was allowed to remain, but the US/English abbreviation was redundantly added to the signs.

The second mystery surrounding Lewisburg is the disappearance of its founder Ludwig Derr. After selling several lots of land, Derr set off for Philadelphia to sell additional lots. Shortly after arriving, records indicate some of his lots had sold. However, Ludwig Derr simply disappears from history in that city. Derr's son George went to Philadelphia to search for his father, but returned a short time later, unsuccessful.

Over the centuries, Lewisburg has been a center of commerce in Union County. The West Branch Susquehanna River was used for logging and shipping, and remains of old factories and other ancient stone structures exist along the river banks. Prior to, and during, the Civil War, many abolitionists lived in the area, and several locations within the town of Lewisburg served as stopping points on the famous Underground Railroad.

According to the United States Census Bureau, the borough has a total area of 1.0 square mile (2.6 km2), all of it land.

There were 1,778 households out of which 17.5% had children under the age of 18 living with them, 33.7% were married couples living together, 8.5% had a female householder with no husband present, and 55.7% were non-families. 42.9% of all households were made up of individuals and 16.6% had someone living alone who was 65 years of age or older. The average household size was 1.97 and the average family size was 2.64. 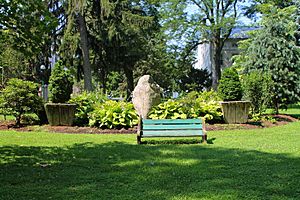 Hufnagle Park is located on Market Street in the downtown area. It offers open space, a picnic pavilion, playground equipment and gardens. It is named in honor of former Police Chief Gordon Hufnagle. Chief Hufnagle died saving lives during the Agnes Flood on June 21, 1972. The park is in his honor, as is a footbridge built in 1982.

All content from Kiddle encyclopedia articles (including the article images and facts) can be freely used under Attribution-ShareAlike license, unless stated otherwise. Cite this article:
Lewisburg, Pennsylvania Facts for Kids. Kiddle Encyclopedia.