Muncy is a borough in Lycoming County, Pennsylvania, United States. The name Muncy comes from the Munsee Indians who once lived in the area. The population was 2,477 at the 2010 census. It is part of the Williamsport, Pennsylvania Metropolitan Statistical Area. Muncy is located on the West Branch Susquehanna River, just south of the confluence of Muncy Creek with the river.

John Brady was one of the earliest settlers in the area. He received a land grant which was awarded to the officers who served in the Bouquet Expedition. He chose land west of present-day Lewisburg, Pennsylvania. He built a private stockade on this land in the Spring of 1776, close to present day Muncy, Pennsylvania, which he called "Fort Brady." John Brady's Muncy house was large for its day. He dug a 4-foot-deep (1.2 m) trench around it and emplaced upright logs in that trench side by side all the way around. He filled the trench with dirt and packed the dirt against the logs to hold the log wall solidly in place. This log wall ran about twelve feet high from the ground. He then held this wall in place upright by pinning smaller logs across its top, to keep the wall face steady and solid. The John Brady homestead was perilously close to the leading edge of the frontier of that time, the Susquehanna River. The other side of the Susquehanna was fiercely dominated by the Indians. The Indians resisted settler encroachment on their territory by routinely crossing the Susquehanna to raid the settlers. The settlers just as routinely crossed the Susquehanna to pursue the raiding war parties to retaliate and sometimes to rescue captives taken by the Indians during these raids. In this ongoing skirmishing, both sides committed unspeakable atrocities on the other, which drove a long-lasting cycle of revenge for revenge brutalities between the settlers and Indians. It was in the midst of this extreme danger and violence that Major John Brady chose to settle his family, which set the stage for what happened to him and for what so greatly impacted and influenced his family—especially, his sons, Continental Army Captain Samuel Brady of Brady's Leap fame and Hugh Brady, who became a Major General in the United States Army. 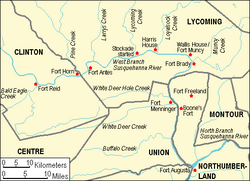 In 1797, ten years after coming to Muncy, Benjamin McCarty conceived the idea of starting a town, and began laying out lots on what is now Main Street, and sold them to different parties. His example was followed by his brother William, north of Water street, and by Isaac Walton. The town was named Pennsborough in honor of the William Penn.

The town grew slowly and was nothing but a village for many years. More than a quarter of a century passed before an act of incorporation was applied for. Finally, by act approved March 15, 1826, it was incorporated as a borough.

On January 19, 1827, with a population of less than 600, the name was changed from Pennsborough to Muncy. This was done because many persons thought it was "too flat and long," and the new name would be more in accordance with the historical associations of the place, and serve to perpetuate the name of the tribe that first dwelt there, a tribe of Lenape, named Monseys.

One of the common misconceptions about United States history prior to the Civil War is that all the citizens of the northern states were against slavery. In fact many of the "Yankees", were all for slavery, especially in states closer to the Confederacy like Pennsylvania, Ohio and Delaware. There were more than a few abolitionists in Pennsylvania, and Enos Hawley, a Quaker citizen of Muncy, was one of the most prominent abolitionists in Lycoming County. Hawley, a tanner by trade, was, like most Quakers, a strong supporter of the abolition of slavery. Hawley invited a now unknown speaker to come to Muncy to speak against slavery. This speaker arrived in April 1842. His arrival and resultant speech set off a tremendous riot that led to the near destruction of a local schoolhouse and the controversial pardoning of the rioters by Pennsylvania Governor David R. Porter.

The anti-slavery speaker gave his speech at a one-room school in Muncy in April 1842. During the course of the speech, eighteen men gathered outside the schoolhouse. They began throwing rocks and other debris at the school, breaking all of the windows. Enos Hawley and the guest speaker were both injured in the assault. Upon fleeing the school, the abolitionists were pelted with eggs. The rioters followed Hawley and his guest to Hawley's home at the corner of High and Main Streets. They continued the assault on Hawley's home until after midnight, when the local law enforcement officers were able to quell the riot and arrest the rioters. The rioters were indicted in September and went to trial in October, when thirteen of the eighteen rioters were found guilty as charged. The jury's deliberation was quite a long process.

Abraham Updegraff was a member of the jury who was the driving force that led to the conviction of the rioters. Updegraff, an ardent abolitionist who was a vital member of the Underground Railroad in Lycoming County, was able to convince his peers that the rioters deserved to be punished. The first jury vote was 11 to 1 in favor of acquittal, with Updegraff being the lone dissenter. Updegraff argued that "we have been sworn to try this case according to the law and the evidence presented and that if no contradictory evidence [is] offered by the defendants than we could do nothing more than to convict them." He was able to make his argument in German which was the native tongue of three other jurors. The second vote was 9 to 3 in favor of acquittal. A third vote brought about the conviction of 13 of the 18 men charged in the Muncy Abolition Riot of 1842. This conviction was essentially overturned by Governor David R. Porter when he pardoned the rioters several days later. Governor Porter's statement of pardon said, "It is represented to me by highly respected citizens of Lycoming County, that this prosecution was instituted more with a view to the accomplishment of political ends than to serve the cause of law and order."

Porter's pardon message placed the blame for the riot on the abolitionist speaker. Porter stated that the speech was "notoriously offensive to the minds of those to whom they were addressed and were calculated to bring about a breach of the peace." This pardon led to Governor Porter being given the less than flattering nickname of the "Previous Pardonin Porter." Historians believe that Porter pardoned the rioters under political pressure that was rampant, in the years prior to the Civil War, regarding the issue of slavery.

Muncy's high school American football team and that of its rival, the Montgomery's high school team, play annually for The Shoe. The trophy was created in 1961 from an old athletic shoe found in the Muncy High School locker room; the shoe has been bronzed and mounted on a wooden box. Muncy currently leads the series with 28 wins to Montgomery's 18. Hughesville's high school team and Muncy are also rivals. In the first game of the season, September 4, 2010, Muncy kept the shoe by shutting out Montgomery 52-0. As of January 2014, Muncy still is in possession of The Shoe.

The Muncy Historic District was added to the National Register of Historic Places in 1980. 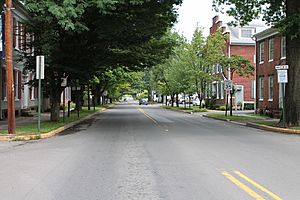 Muncy School District was ranked 186th out of 494 Pennsylvania school districts in 2016, by the Pittsburgh Business Times. The ranking is based on the last 3 years of student academic achievement as demonstrated by PSSAs results in: reading, writing, math and science and the three Keystone Exams (literature, Algebra 1, Biology I) in high school.

The Muncy School Board is elected for four year terms. The Board has raised property taxes to fund the school district every year for five years 2012–2016. In 2016 the rate is 14.7500 mills.

Muncy residents may also apply to attend any of the Commonwealth's 14 public cyber charter schools (in 2013) at no additional cost to the parents. This includes SusQ Cyber Charter School which is locally operated. The resident's public school district is required to pay the charter school and cyber charter school tuition for residents who attend these public schools. In 2015, Muncy School District's tuition rate was elementary school - $9,283.18 and high school - $11,940.51. By Commonwealth law, if the District provides transportation for its own students, then the District must provide transportation to any school that lies within 10 miles of its borders. Residents may also seek admission for their school aged child to any other public school district. When accepted for admission, the student's parents are responsible for paying an annual tuition fee set by the Pennsylvania Department of Education.

BLaST Intermediate Unit #17 provides a wide variety of services to children living in its region which includes the borough of Muncy. Early screening, special education services, speech and hearing therapy, autistic support, preschool classes and many other services like driver education are available. Services for children during the preschool years are provided without cost to their families when the child is determined to meet eligibility requirements. Intermediate units receive taxpayer funding: through subsidies paid by member school districts; through direct charges to users for some services; through the successful application for state and federal competitive grants and through private grants.

All content from Kiddle encyclopedia articles (including the article images and facts) can be freely used under Attribution-ShareAlike license, unless stated otherwise. Cite this article:
Muncy, Pennsylvania Facts for Kids. Kiddle Encyclopedia.